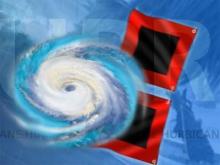 The core of Hurricane Earl is passing well to the East of the Turks and Caicos Islands.

A Tropical Storm Warning is in effect for The Turks And Caicos Islands.

A Tropical Storm Watch is in effect for the Southeast Bahamas which includes Inagua, Mayaguana, Crooked Island and Acklins.

At 2:00pm, the center of Hurricane Earl was located near Latitude 21.5 Degrees North and Longitude 68.5 Degrees West or about 170 miles East of Grand Turks, Turks And Caicos Islands and about 280 Miles East-Southeast of Mayaguana.

Earl is moving toward the West-Northwest near 14 Miles per hour.  A gradual turn toward the Northwest is expected later today.  On the forecast track the core of Hurricane Earl will be well to the East of the Turks and Caicos Islands this afternoon and tonight.

Maximum sustained winds remain near 135 miles per hour with higher gusts.  Earl is a category four hurricane.  Some fluctuations in strength are likely during the next 24 to 48 hours.

Residents in the Turks And Caicos Islands can expect heavy downpours, strong gusty winds up to tropical storm force, flooding in low lying areas and dangerous battering waves this afternoon and tonight.

Therefore residents should remain indoors, once conditions begin to deteriorate and remain ready to take quick action should the storm shift course and increase it’s threat.

Residents in the Southeast Bahamas should continue to monitor the progress of Earl and remain indoors during the passage of feeder bands which can produce heavy downpours and strong gusty winds.

Small Craft Operators Should Remain In Port Until Seas Subside.