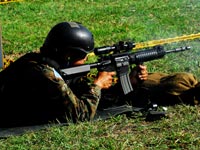 This year’s Special Operations and Commando Forces competition was hosted by Colombia, which won the competition, as it has done for the past five years. There were teams competing from the Bahamas, Belize, Brazil, Canada, Chile, Colombia, Costa Rica, the Dominican Republic, Ecuador, El Salvador, Guatemala, Guyana, Honduras, Jamaica, Mexico, Panama, Paraguay, Peru, Trinidad and Tobago, the United States and Uruguay. The highest score (for Colombia) was 4,175. The last place score (for the Bahamas) was 2,088. In the middle, at 11th place was the United States, with 3,104 points.

The completion consists of eight days of events that test the skills of the participants. There is also some joint training and seminars. Senor special operations commanders from participating countries also meet and discuss matters of mutual interest.