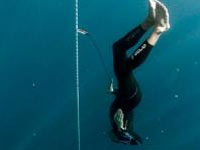 A world champion New Zealand freediver who narrowly missed the world record for the deepest dive says he wants to make another attempt next year.

William Trubridge, of Hawke’s Bay, blacked out during an attempt at a world record-matching 126-metre dive in the Bahamas last week.

His attempt immediately followed Russian Alexey Molchanov, who had just set the record for the constant weight dive.

“There was a lot of celebration going on [for Molchanov] while I was trying to prepare,” Trubridge said.

“I had to just block that out of my mind as much as possible.”

He said the first breath of air after a dive takes a few seconds to be absorbed into the blood stream and pumped to the brain.

“In that interval your blood [pressure] is still dropping. I was just a little bit too far over the edge,” Trubridge said.

Blacking out disqualified his attempt.

Despite narrowly missing the record, he was crowned champion of the 2012 Suunto Vertical Blue competition, where he broke the national record with a 121m dive in the constant weight category in Dean’s Blue Hole on Long Island.

There were 56 athletes from 21 countries participating in what is the largest freediving event of its kind, and Trubridge’s dive to 121m was on the penultimate day.

Each freediver accrued points for all their dives during the 10-day competition at what is the deepest known seawater blue hole.

Afterwards Trubridge, who organised the event, said: “I’m a bit disappointed with my own performances but given the enormity of Suunto Vertical Blue I can’t be too disgruntled. The results speak for themselves.

“We had the most performances of any depth competition ever, and I’ve had more athletes tell me that this was the best comp they’ve ever attended.”

Trubridge said he would train to attempt the world record again at a competition in May.

He was the first man to break the 100m depth barrier completely unassisted – without the use of fins, rope or weights – in 2010.

He also holds the record for “free immersion”, where divers descend and ascend by pulling on a rope.

In 2011 and 2012 Trubridge received the World’s Absolute Freediving Award, which ranked him as the world’s top freediver.