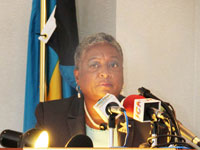 The widest and most comprehensive consultation is necessary to affect the changes and reforms anticipated, said Ms. Ruth Bowe-Darville, president of the Bahamas Bar Association and chairman of the Bar Council, while addressing the Bahamas Constitutional Commission on Monday, Feb. 25.

She said that the Bahamas Bar Association is ever mindful of the Preamble to the Constitution and reveres the same in that it provides for “the establishment of a free and democratic sovereign nation, founded on spiritual values and in which no man, woman or child shall ever be slave or bondsman to anyone or their labour exploited or their lives frustrated by deprivation.”

The Bar Council, the executive arm of the Bahamas Bar Association, Ms. Bowe-Darville said, is mandated by statute to maintain the honour and independence of the Bar and the defence of the Bar in relations with the executive and the judiciary; to protect the public right of access to the courts and the promotion and support of law reform.

The Bar Association president said regard must be had for past attempts at constitutional reform and that there are many lessons to be learnt.

“What is interesting though is that the issues, especially of the 2002 referendum, are still relevant today and demand resolution,” she told the Commission.

She said that the Bar particularly note the proposed amendments to affect gender equality. “We are certain that the Bahamian public is prepared and willing to accept that all forms of discrimination against women, their children and spouses should be removed from the constitution and that no (Bahamian) should be discriminated against on the grounds of gender …”

Mrs. Bowe-Darville said any contemplated amendments should seek to eliminate the manifest injustice found (in) Article(s) 8 and 9. And that attention needs to be given to Article 5 in reference to discrimination against Bahamian women with foreign spouses as at Article 5 in light of Article 10.

She said that Article 13 should now be re-read with reference to the status of children’s Act. She recommended that the physically disabled be included in Article 26 as an added anti discrimination factor and that the section should also be gender free.

“Even though not fully ventilated the issue of same sex associations and freedoms came up for mention, and Article 14 needs to be considered in light of the Status Children’s Act 2001 and the Inheritance Act 2001,” she said.

She added that The Bahamas is a centre of great geographical, economic and financial importance internationally, and,  “If we continue to maintain that we are a commercial centre then it is imperative that our judicial system be the best, not only in the region but in the world.”

The president said “In an effort to accommodate our “reputation” it is necessary to provide the Court with all of its justifiable needs – proper recognition and respect for our bench; adequate remuneration for judges and attendant staff; upgrades to personnel, accommodation, technology and ultimately and most importantly, the continued maintenance of the independence of the judiciary.”

She said the comment is made now especially as the country moves toward the introduction of a Family Court.

Also appearing before the Commission, Chief Clerk of the House of Assembly, Maurice Tynes said he wished to make an argument for the abolition of the Senate and the creation of a unicameral Parliament.

He noted that Bicameralism, which refers to two separate bodies that share responsibility for the enactment of legislation became popular in Britain and Europe during the 15th century, and that The Bahamas legislature has had a bicameral feature since its inception in 1729 as the Governor’s Council performed both executive and legislative functions.

Mr. Tynes referred to James Madison, writing in the Federal Papers, who argued forcefully for a bicameral congress in the United States.

“In making the case for a second chamber he wrote; ‘it doubles the security to the people by requiring the concurrence of two distinct bodies in schemes of usurpation or perfidy, where the ambition of corruption of one, would otherwise be sufficient.'”

He said Madison argued that a second chamber should serve as a sort of security blanket for the people to guard against excesses by the other chamber.

“Madison also wrote; that a singular popular elected legislature might respond too quickly to changes in public opinion and would enact defective laws which do mischief before they could be amended. Here Madison makes the case that a second chamber should serve as a chamber to review the legislation and actions of the other chamber,” Mr. Tynes said.

The original thinking behind a second chamber was that it should be constituted by older and hopefully wiser men who would bring a different perspective, an apolitical, nonpartisan approach when reviewing legislation. He said, the Bahamian Senate, beginning with the introduction of political parties, moved away from these original principles. The Senate over the years has been used either as a platform for younger aspiring politicians or for candidates who lost an election but wanted to retain their public visibility.

“One other point Mr. Tynes said, relating to the Senate is that very few people understand the concept of a lower House and an Upper House. The abolition of the Senate would remove that terminology from the parliamentary language and any lingering negative connotation that now exist.”

My recommendation then is that the second chamber be eliminated and that a unicameral Parliament be created. The Parliament could consist of 54 members 38 elected by the First Past the Post System and the other 16 by proportional representation said Mr. Tynes.