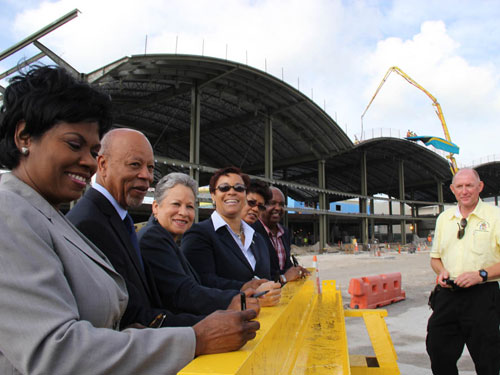 The completion of the final stage of the Lynden Pindling International Airport expansion project signals the end of the first step in transforming the country’s major gateway, says Minister of Transport and Aviation Glenys Hanna-Martin.

She said that the development sets the tone for the future of the aviation sector in The Bahamas.

Her remarks came during the Last Beam/Topping off Ceremony at the Stage Three Construction Site at the LPIA on Friday, February 15, 2013.

Before the beam was hoisted into the air and attached to the roof of the Domestic Section, it was signed by Mrs. Hanna-Martin; Minister of State Hope Strachan; Anthony McKinney, Chairman of the Nassau Airport Development Company (NAD); Vernice Walkine, Vice President of Marketing & Commercial Development/Incoming President and CEO of NAD; former Chairman of the Airport Authority, Frank Watson; other Government officials; officials from NAD and construction workers.

The Government has embarked upon the LPIA project at an estimated $409 million, aimed at delivering a modern, efficient and culturally reflective airport experience.

And, once all three phases are completed in 2013, the airport complex will be 571,000 sq. ft, with an additional one million sq. ft of aircraft operating service and the ability to handle five million passengers annually.

“Today we are just months away from the completion of a vision that started some years back,” Mrs. Hanna-Martin said.

“This third and final stage of the Airport Expansion Project is significant because it signals that all three travel categories services by LPIA – US Terminal, International and Domestic tourists – will have facilities that are world class.”

While the Domestic and International Arrivals and Domestic Departures terminal is the last of the three, it will be the best.

Mrs. Hanna-Martin said that NAD officials and the construction team of Ledcor/Woselee are taking lessons learnt through stages one and two and applying them to Phase Three. They are tweaking and making adjustments to the final stage based on real world experiences.

She also thanked and acknowledged the work of the scores of Bahamians employed on the project.

Stating that the domestic tourism product will be greatly enhanced by the new facilities, Mrs. Hanna-Martin also noted that local tourists hopping on planes to visit relatives in the Family Islands, heading to Regattas or to explore “a new island” will do so in style.

Those travelling to and from The Bahamas to international destinations in the United Kingdom, South America and the Caribbean will also enjoy the upgrades and amenities in Stage Three, she said.

“The completion of the final stage of the LPIA Expansion Project signals the end of the first step of transforming our country’s major gateway. It will mark the completion of a vision – beautiful purpose built facilities which will proudly bear the name of Sir Lynden Pindling, father of the modern Bahamas,” she said.

Additionally, the Government is working with a team of local artists to create and erect a bust in Sir Lynden’s honour, to be displayed in a prominent place in this final section of the terminal.