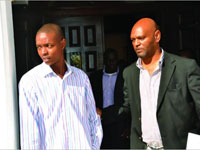 Two policemen were charged in two separate matters in the Magistrate’s Court — one with causing grievous harm and the other with unlawful sexual intercourse.

Police reservist Germain Ferguson, 26, was charged with having unlawful sexual intercourse with a 15-year-old girl.

Magistrate Subusola Swain did not reveal the name of the alleged victim. The name also can not be published as the girl is a minor, and the matter involves a sexual offense.

Ferguson pleaded not guilty and was granted bail at $7,500. He was ordered to appear in court on April 11 and to have no contact with the alleged victim.

The girl’s mother was also charged with failing to report the abuse of a minor.

According to court documents, the mother had reasonable grounds to believe that a sexual offense had been committed.

The girl’s father reported the alleged incident, according to the documents.

The mother was granted $6,000 bail and ordered to have no contact with her daughter, unless supervised by the court.

She was also ordered to appear in court on April 11.

According to court documents, McPhee alleged that the two men struck him in his eye and inflicted other injuries to his head.

Both men pleaded not guilty to the charge and will return to court on April 11.

They were granted bail in the amount $6,000 each. Swain ordered them not to have contact with the complainant.