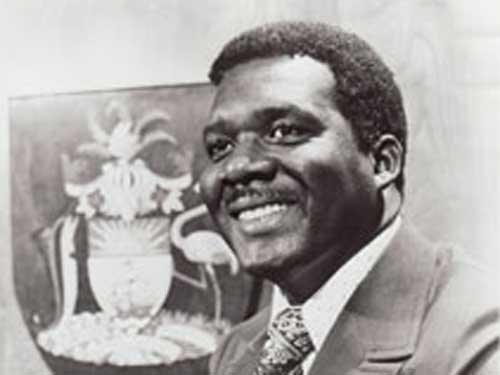 As if it were just yesterday, I can well recall witnessing the Union Jack being lowered on Fort Charlotte in Nassau for the very last time this Wednesday to mark the birth of a new nation, the Commonwealth of The Bahamas, and a Bahamian flag hoisted for the very first time.

At that moment, Bahamians by the thousands shouted approval and sang the nation’s new National Anthem March On Bahamaland with a sense of awe-inspiring pride unthinkable as former “British subjects.”

That was 39 years ago when The Bahamas (established as a British Crown Colony in 1718) became a sovereign nation on July 10, 1973.

This week, Bahamians are celebrating the 40th anniversary of independence with similar enthusiasm and hope for a better tomorrow as they did four decades ago.

None of this would have been possible had it not been for the leadership and determination of Lynden Oscar Pindling, architect of majority rule in 1967 and the Father of Bahamian Independence in 1973.

He died in August 2000 after an unprecedented 40 years as a Member of Parliament, of which 25 years was spent as prime minister.

Pindling’s story is not all that complicated. Like his peers back in the day, he too was a serious young man, who, at a very early age, came to recognize the ugly face of prejudice and social injustice in his much-loved Bahamas.

However, it was not until he went off to study law in London in 1948 that his understanding of agonizing injustices against the Bahamian masses became more defined.

He returned home in 1953 and joined the then struggling PLP, was called to the Bahamas Bar and then began the political struggle by transforming his new ideas of fair-play and justice into action.

The road to Bahamian independence was not an easy one and was at least two decades away from when he returned to Nassau. The fight, was just beginning when, in 1956, Pindling not only won his first seat in Parliament but was also chosen as party leader.

During the next 10 to 15 years, there were a number of hurdles which the PLP had to overcome, including the push for political reforms; scrapping the  “property” qualifications on which the right to vote was based; granting women the right to vote; and pushing for 18-year-olds vote.

The one single feat which, in my opinion, turned the tide towards Independence thinking occurred during the general election of 1966, called by the governing white United Bahamian Party (UBP).

The PLP and the UBP each won 18 seats but two independent candidates sided with the PLP and Pindling took office as the first black premier in January 1967.  Majority rule had finally come to The Bahamas.

How that happened is still a topic of much debate among the politicos who agree or disagree not only on who contributed to majority rule but also what majority rule meant or did not mean back in 1967.  One thing was certain, though: Majority rule provided a clear passageway on the road to independence.

There were those who did not think The Bahamas was ready for independence, even though the PLP administration enjoyed the “open” backing of Britain, the colonial power. There were also those who wondered and questioned what it would be like to be “Bahamian” in an independent Bahamas.

At a national conference on independence held in Nassau on April 12, 1972, Pindling responded to the critics: “…One of the great psychological changes that have overtaken the Bahamian people in the years since 1967 is their sense of pride in being ‘Bahamian.’

There was a time when being a Bahamian did not count for much.  The Bahamian was tolerated but not recognized.  Now he is given full recognition and cannot be just tolerated.

Bahamians today are indeed proud to be a free people and proud of being able to make decisions on their own without being under the control of a colonial authority.