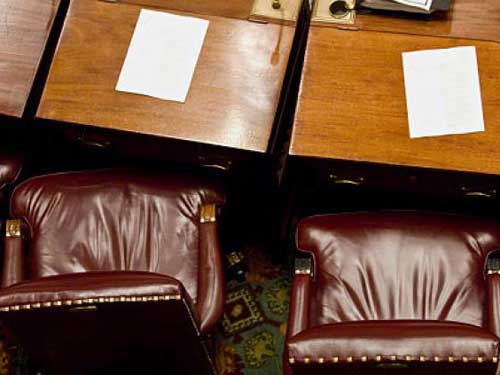 Bannister previously said the FNM members would “seriously consider” whether to attend and debate what government members have called
“landmark bills”.

But he indicated that the opposition is resolved in sending an important message.

“We intend to hold firm to the commitment that we made not to return until the leader (of the opposition Dr. Hubert Minnis) is able to return to the House of Assembly,” said Bannister, who was out of the country.

“The issue is one of highlighting for the Bahamian people, the highhanded abuse of office by the Progressive Liberal Party (PLP).”

FNM senators made their position known on August 14 when they decided not to participate in Senate proceedings although they showed up at the Senate building.

Speaker of the House of Assembly Dr. Kendal Major suspended Minnis earlier this month for two sittings after the opposition leader refused to back off from comments he made in relation to Prime Minister Perry Christie’s alleged relationship with controversial Lyford
Cay billionaire Peter Nygard.

FNM Senator Kwasi Smith has said the decision to suspend Minnis made a “mockery of our parliamentary democracy” and after much deliberation the opposition senators decided to stand with the FNM leader.

Leader of Government Business in the Senate Allyson Maynard-Gibson condemned the FNM’s actions and said she was disappointed, but not surprised that the FNM “put cheap politics over the interest of the Bahamian people”.

The Senate continued in the absence of the boycotting senators. Bannister yesterday called Major’s decision arrogant.

“It flies in the face of our democratic traditions, and it is critical for us to show Bahamians the road that they are now seeking to take our country down,” he said.

“It is critical that we highlight an injustice that has never been previously committed in hundreds of years of parliamentary democracy.

“If we do not protect our democracy now, the next time the attack will be worse and will erode more of the rights that Bahamians have every right to expect.”

Bannister said no bill is more fundamental than Bahamians’ rights to not be “tyrannized by the majority protected”.

“No single bill should take the focus away from the erosion of critical principles related to representation in Parliament,” he said.

“I dare say that our actions will bring attention to the constitutional role of the Senate that it has not had in decades.”