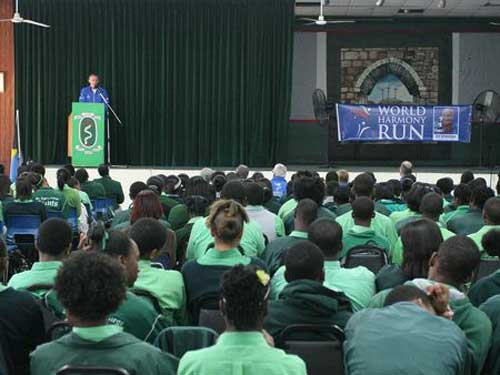 Chief Justice Sir Michael Barnett rejected claims that it was “unreasonable” for the Anglican Central Education Authority (ACEA) to cancel graduation and prom for the St. John’s College 2013 graduating class.

Sir Michael handed down his ruling in the Supreme Court.

While he ruled in favor of the ACEA, he said the organization should consider reimbursing the $300 paid to the school for graduation expenses to the students who were not involved in any wrongdoing.

“I cannot leave this judgement without expressing my sympathy for those plaintiffs and their parents who have not participated in any of the misconduct complained of by the defendants,” Sir Michael said.

“No amount of money can really compensate them for the disappointment they undoubtedly endured by not culminating their high school career with the traditional graduation exercises.”

Explaining his ruling, Sir Michael said there is no evidence to prove the ACEA was unreasonable.

“In the present case the defendant would only be in breach if that decision was capricious, arbitrary, and unreasonable,” he said.

“That is to say, the defendant would only be in breach if no operator of the school acting reasonable could have made the decision that it made to exclude all students from participating in graduation ceremonies.”

Sir Michael said he is not satisfied that the decision was “capricious, arbitrary, perverse or unreasonable for the defendant to exclude all students from participating in a graduation ceremony.”

During the hearing, Attorney Christina Galanos, who represents 26 students and their parents, said unilaterally canceling the graduation was a “dangerous” move because the school had entered into contracts with each student.

A main point in Galanos’ case was that the school entered into individual contracts with the students, which said they would be eligible for graduation once they met certain requirements.

However, Sir Micheal said the behavior complained of could be
attributed to the entire class as in many cases it was obvious that it was a group activity.

Among the reasons the ACEA canceled graduation was the fact that more than 90 percent of seniors did not show up to school on “ditch day”, and the participation of some students in a video dubbed the “last whine” posted on YouTube which showed them dancing.

Sir Michael admitted that he was surprised that no warning was given to the parents that the participation in ditch day was behavior that could jeopardize a student’s ability to participate in the graduation ceremonies.

However, he noted that “last whine event” appears to have been the act which was the proverbial last straw and precipitated the decision to cancel graduation for everyone.

The St. Johns students claimed that they performed the “kotch” dance, which was featured in the video, in the presence of the principal on a previous occasion. The evidence was not denied by the defendant.

Sir Michael said the evidence “troubled” him as it appears that it may have given the students the impression that there was nothing wrong with the dance being complained about.

He ruled: “Having said that, the students obviously knew that they were doing something unacceptable as the video contained the plead ‘Father forgive me for the sins I am about to commit at the last whine.’”

After the ruling, Diane Stewart, vice chancellor for the anglican diocese, said she is pleased with the result.

“I think it’s an unfortunate set of circumstances but I believe it was the right decision,” she said outside of court.

Asked whether the ACEA would consider reimbursing students who were not involved in the video, she said, “The point is there was no legal obligation to do so. The diocese will look at the ruling, consider it and they will decide wether or not they will make any decision as a result of this ruling.

“It’s been a learning experience for everybody. We need to learn from it and move on.”

In a statement, Galanos thanked the chief justice for expressing his sympathy for the students and parents.

She did not say whether the students planned to appeal the ruling.