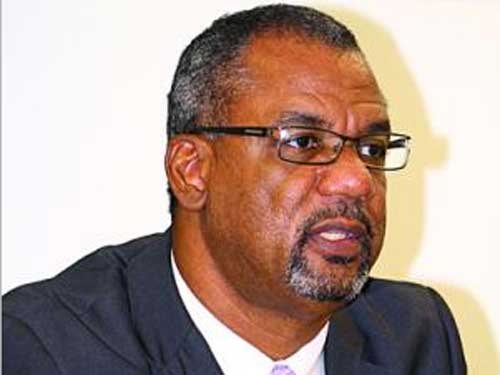 The sabotage also forced officials to close the school for yet another day, Fitzgerald said.

“We reported the matter to the police today (Friday) and it appears that every day this week, we have had an experience of damage to our units, which has caused us now to put the units at both schools under 24-hour security watch,” said Fitzgerald at a press conference at the Ministry of Education.

“It’s unfortunate that it has come to this, but this appears the sort of action that we have to take with what is going on.”

Fitzgerald said the AC unit will be repaired over the weekend and school will resume on Monday. He said the act of sabotage is of “extreme concern” to him.

Over the past few days, officials found puncture holes and other damage to the air conditioning ducts, which have resulted in problems with the ventilation system, Fitzgerald said.

“We obviously have to now spend scarce resources protecting our units,” he said.

The schools opened earlier this week after Fitzgerald said the Ministry of Environment gave the all-clear.

However, the union continued to express concerns about conditions at both schools.
The union had its own assessment conducted by Enviro-Clean Company on September 14.

In its report, the company said the air conditioning units and vents on each floor of Stephen Dillet are “extremely dirty, pushing out dust and contaminated”.

The company noted that in an opening connecting the second and third floors, exposed fiberglass has been used to fix the ceiling.

“Overall Stephen Dillet Primary School is not fit or worthy to open for public use,” the report said. However, Fitzgerald dismissed that report yesterday.

He said he was informed that the report was prepared by a teacher who is presently facing disciplinary action for an exorbitant number of absent days.

“I believe that my ministry has engaged some of the most intelligent teachers anywhere in the world and they are capable of reading between the lines,” he said.

Fitzgerald said he is satisfied that all of the issues that could potentially pose a health risk have been addressed.

He said officials from the Department of Environmental Health Services (DEHS) also drew the same conclusion.

However, he added that the DEHS advised the ministry to carry out the remainder of work over the next 10 days, including fogging inside the building and cleaning the AC ducts.

“This is a procedure that is carried out routinely in houses, business, hospitals and schools in this country and around the world every day,” Fitzgerald said.

“It does not require one to move out of their home, close their business or shut down a hospital to clean ducts and vents.”

Fitzgerald invited parents to tour the affected schools on Monday so that they can see for themselves that the issues have been rectified.