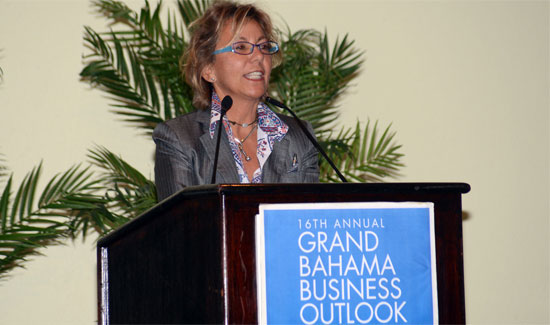 Firstly, I wish to thank Joan Albury and the Counsellors for establishing such an important vehicle to share with the Grand Bahama community, the outlook for our island!

Next year will mark 60 years of the birth of the City of Freeport; 60 years since the signing of the Hawksbill Creek Agreement; 60 years of development and the fulfillment of a dream; and 60 years of a partnership between The Government of The Bahamas and The Grand Bahama Port Authority. I was also born in 1955 which helps me to remember the date.  As you can see, both Freeport and I have weathered a few storms! But they say Life Begins at 60!

What is The Hawksbill Creek Agreement? – What does it mean? It is in a sense the Fabric of Freeport  – you could call it the Magic Carpet under the Magic City —

Let’s look at the Rich Tapestry that is the History of Freeport’s Development – And it is not so old – There are some of you who have experienced that whole journey… The dredging of the deep water Harbour; the canal system; The Rand Memorial Hospital; The schools; The Banks; The new International Airport; The Container Port; the Highways and Byways…

As a teenager I experienced the nightlife; Kiki Ruge, Sultan’s Tent, The Sandpiper and Joker’s Wild.   I say this because many of us, not of Sir Jack’s generation, need reminding from time to time of ALL that has gone into the Freeport of Today. And the Freeport of Today is:

THE BUILDING BLOCK for the Freeport of the Future

Just think for a minute of the wonderful companies that the “Freeport Brand” “The Hawksbill Creek Brand” has been able to attract here. It reads like a Who’s Who of the Business Directory:

Hutchison Whampoa (the World’s leading developer of Ports); MSC (the largest Shipping Company in U.S and Latin America and one of the largest in the world). Buckeye who own BORCO (with some $2B invested in the last 3 years alone); Dart Enterprises who own Polymers; Martin Marietta of Bahama Rock; Novasep who own Pharmacem, manufacturer of the key ingredient in  the no1 HIV drug of today ; Columbus Communications, the fibre optic network hub of the Caribbean; Carnival Cruiseline and Royal Caribbean whose cruiseships not only frequent these shores but who between them built and own the GBShipyard – I don’t want to steal Carl Gustav Rotkirch’s thunder but the latter has one of the very largest cruiseships in the world in dry dock as we speak! Who else? Clarins; Scotiabank; RBC; Canadian Imperial Bank of Commerce CIBC or here First Caribbean, I could go on and on…But Ladies and Gentlemen this isn’t New York or Hong Kong or Paris this is the small island of Grand Bahama—These companies have invested in Grand Bahama, in the people of Grand Bahama. They are good corporate citizens and Guess What? They are ready to invest more, millions more! And it’s our Mandate to help them to do so. And also to attract new players.

And look at our Grand Bahamian Businesses from FOCOL to Bahamian Brewery to Solomon’s to Car Quest; Freeport JetWash; and the brand new Caribbean Tobacco;

Or indeed Quality Services the largest steel-manufacturing company in The Bahamas and Bradford Marine – Everyone we collectively call Freeport’s licensees.

That is the essence of our Private/Public Sector partnership so avant-garde that it pre-dated the Inter-American Development Bank IDB initiatives of today; Private Equity risk relieving the Govt from the burden of huge infrastructure debt obligations. It’s a great model and one that the Port Authority and the Government by agreement between them has the template for—The Hawksbill Creek Act.

What are our issues today? To answer that we can’t just look at ourselves in “splendid isolation” we have to constantly re-evaluate ourselves in relation to the Countries and Nations around us. Remaining competitive is paramount, and more than that we must always strive to be ‘Best-in-Class’ to survive in an ever-changing environment. As Mr. GianLuigi Aponte of MSC said: “We don’t always grow as a matter of ambition, but sometimes our growth is pushed by our competitors’ new ideas and strategies”.

Today with the widening of The Panama Canal we are experiencing just that – call it ‘The Chase for Post-Panamax Trading’, and here’s just one example where we can be best in Class:

1)    The Mariel Port of Cuba opened just last week – built at a cost of $800m with loans from the Brazilian Govt, built by a Brazilian company – hopes to accommodate I million TEU (1 million container boxes). We have that already–

2)    Jamaica is in active talks with the state-run China Harbour Engineering company to develop a $1.5b Transshipment Port to aim at, and I quote, “becoming a global logistic hub for mammoth Post-Panamax ships”.

The shipping business is shaping up to be something we’ve never seen before! Colombia is looking at creating a hub, and a few countries in Central America including Costa Rica. In addition there is Panama, and the Dominican Republic.

BUT FREEPORT IS already there—Freeport has it all

4)     Last but no means least we already have the end-user willing shipping client to deliver the volume.

ON THE DRAWING BOARD –

So, what’s on the drawing board and what are WE doing to remain competitive…..well, phase 5 of FCP is our answer to what is happening around us. As you heard from the Hon Minister – the existing fee impediments will go.

I can speak to the ongoing active discussions between The Government, GBPA, Hutchison, and MSC to galvanize this important next step which is not just pie-in-the-sky, but imminent and timed by the parties to coincide with the completion of the Panama Canal – So we’re talking 2015. For a further $250m -$300m of Private Equity contributed by Hutchison and MSC – not, please note, by the State as in Cuba and Jamaica and NOT by spending $1 billion –  MSC can double – DOUBLE – our Volume here to 2 million TEUs and that’s not just expansion but modernization, upgrading, and semi-automation to transform this into a Flagship Port – to grow Freeport into a First League Container Terminal – not just a conventional terminal  –  possibly the most High-Tech Terminal in the world. Adding over 200 jobs to the local economy, over a two-year build out period.  And construction could begin this year.

So, ladies and gentlemen, Grand Bahama Island has the tools to be the Largest International Container Port Hub in the region, and that illustrates what it means to be Best-in-Class. And the beauty of it all is that the money to expand Phase 5, like almost every other infrastructural project within the City of Freeport isn’t funded by tax payers or doesn’t have to be borrowed by the country and doesn’t put a burden on its citizens.

If Transportation Hubs are growing as fast as the world turns. Obvious SPIN-OFFS are the Shipyard; Borco and Bradford Marine. But The Clusters create an ideal environment for the development of new small and medium-sized Bahamian Business enterprises. Opportunities surrounding SeaPort and Airport infrastructure have connectivity to the Real Estate equation and to Real Estate Development.

A HEALTHY PORT IS A HEALTHY FREEPORT!

And Of course Ports and—

Interestingly alongside its $800m Port, Cuba has also just invested $300m in a New Free Trade Zone called The Special Development Zone ZED so that “foreign-owned factories can produce goods for other markets” – 193 sq miles large. Freeport is 230 sq miles. Think how ahead of its time! But also think of the competition.

Besides Cuba there are The Cayman Islands – we’ve all heard of:

Enterprise City – What stands out on that slide – What do they advertise in a nutshell? No Tax – No Red Tape!

And On Tuesday this week, Health City Cayman opened its doors to the public. The complex is also planned to have a medical university and an assisted-care living community.

The answer is a resounding Yes – the HCA is still relevant and very much of the moment.

I would like to thank my friend, the Minister of Tourism and MP for West End, for getting the issue of the taxes imposed by the Government’s 2014 budget out of the way, from the onset.  I would also wish to publicly thank the Prime Minister for the attention he has given to this most critical matter that challenged the future of our economy.

This didn’t just happen overnight.  It was months of discussions with Government, the Port Authority, and stakeholders of Freeport.  The PM has made himself personally available in order for Freeport to move forward.

Not everyone is able to wade through the Hawksbill Creek Agreement; here The Letter of the Act is set out and this is what builds investor confidence by providing stability and certainty and minimizing any perceived political risk by foreign entities. An Investor could lose confidence if they thought the so called ‘magic carpet’ was being pulled out from under the Magic City!

Having worked closely with the Government on the recent Customs Regulations, I’m now confident that we can find positive resolutions to the expiring concessions in the self-same spirit. After all we share the same goals to create more jobs, more revenue for the nation, and to see Freeport explode into life.

Lastly I can’t close the chapter about being competitive, without addressing the issue of power.

Unlike many other Caribbean countries, we now have RELIABLE power and with GBPC’s brand new generators the possibility to convert to Compressed Natural Gas. They JUST need the permits from the U.S. I invite all stakeholders to lobby the US for those permits. We are ahead of the game. That would make us Best in Class: Stable rates; lower rates and other benefits to Industrials & Residents. As Demand grows the electricity price will fall too. Living on an island with a small population instead of a mainland continent isn’t all plusses! But I know Cost is a very emotive issue—and I can assure you it is being addressed as a PRIORITY by us as Regulators. By the way in the Cayman Islands with its Enterprise City; Electricity Cost is 42c compared to our 35c/kwh. In fact as part of the Regulatory Transparency we propose to make GBPC performance and efficiency reports available to the Grand Bahamian public.

THE GRAND BAHAMA I SEE!

The Grand Bahama I see is one where ….post-panamax vessels are lined up at our High Tech Container Port…

The Grand Bahama I see is the largest logistics and transshipment hub in the region, with advanced international business centres.

I see Grand Bahama as a major Second Home destination.

The Grand Bahama I see has a Stem-Cell Research Centre; hospitals, pharmaceuticals and wellness centre. But I leave that chapter to our very own Dr Darville our Minister.

I see a Grand Bahama being returned to a major Golf Destination and Boating Destination.

I see a Grand Bahama Island as a Cultural destination – with Music & Film Festivals.

I see a Grand Bahama where the opportunities are vast, jobs are plentiful, and our young people want to return home because they have careers right here in Freeport!

It would have been my father’s birthday next week – It is 10 years since he died, and I wish he were here to see the Grand Bahama I can now see.

Thank you and Good Afternoon!