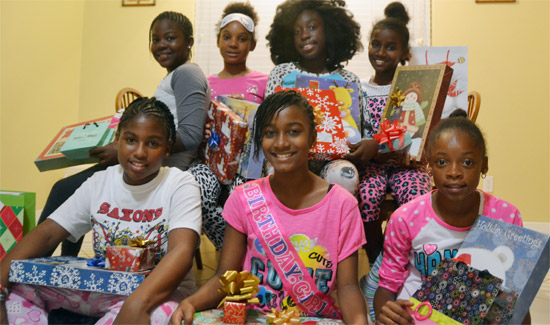 This Christmas, sixth grader Sierra Blair discovered that the old adage, “it’s better to give than to receive” is true after all.

On the eve of turning 11, Sierra told her mother she wanted to give something away for her birthday on December 19.

“She wasn’t sure what she wanted to give away, so I suggested we give her birthday gifts to the Bilney Lane Children’s Home,” said Sierra’s mom, Tosheena Robinson-Blair. “To her credit she only thought about it for a minute before she agreed.

Thus, a one-time connection with the children’s home turned into a more meaningful relationship.

The Blair’s first encounter with the home was over a year ago when Sierra’s school, Kingsway Academy required rising fifth graders to spend some time at an orphanage as a follow-up to a summer reading requirement of a book about two children living in a foster home.

“When I first went to the Bilney Lane Children’s Home I got to play with the children there so I really wanted to give them my birthday gifts,” said Sierra.

Mrs Robinson-Blair used the money she would have spent on gifts for Sierra to purchase presents for displaced residents of the Bilney Lane Children’s Home.

The family also asked the six guests attending Sierra’s birthday slumber party to purchase an item for a child at the home rather than a gift for Sierra.

On Sunday, December 21, the Blairs presented the children with their gifts and the home with a small donation.

“I want Sierra to have a sense of giving. To whom much is given much is expected,” said Mrs Robinson-Blair. “We went to present to them, but I feel they gave something back to us. To see their little faces light up in anticipation, it was really a joy.”

“Thank you and God bless you,” they chimed afterwards, in the sing-song manner typical of small children.

“I would be sad if I didn’t get anything for Christmas,” said Sierra. “It made me really happy to see they were happy. I hope they like what we got them.”

Donations typically roll into the home during the Christmas season followed by a drought in the ensuing months.

“Small donations are big donations to us. What we collect during the Christmas help to keep us later,” said Olivia Major, the home’s administrator. “The point is we need help – real help. Whatever you give helps the home and makes our job easier.”

Six months ago the Bilney Lane Children’s Home moved out of the home it had occupied for 26 years.

The small home which caters primarily to mentally challenged children was forced to relocate to a senior citizen’s day care centre in the Yellow Elder community.

“The Bilney Lane building was over 200 years old,” explained Ms Major. “It was a small house on a small property. The area was no longer conducive for children.”

Since the move, the home has ramped up its year-long efforts to find a more permanent place. Along with Ms Major, Methodist Church Conference Office, the Ministry of Social Services and even a real estate company have all joined in the search.

Thus far, they’ve had no luck.

“We’ve found places to rent, but landlords are unwilling to rent to people with children and with us being a children’s home we are finding it almost impossible to locate a place,” Ms Major explained.

“Although we appreciate our present accommodations, it’s clear to see we need our own home. Ultimately, we need land and funds to build our own place. Whoever hears this, or reads this, whatever they give, no matter how small we will appreciate it.”