Noted QC: We Should Have The Right To Vote For Our Prime Minister 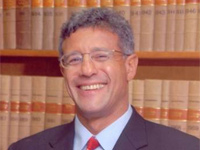 A noted Queen’s Counsel attorney is calling for an overhaul of the political process, saying the time has come for Bahamians to choose their prime minister.

“Under the present system, we have the right to cast one vote, that of our Member of Parliament,” said Fred Smith, QC. “We have absolutely no say in who is prime minister.

The party has already chosen its leader through an arcane and archaic process of convention, which is really a big political party with negotiations, and rewarding generals and backbenchers who show allegiance. That’s not reflective of what the public wants or who the public would choose.

“With the leader being chosen by party faithfuls, but not by the public except insofar as electing the most MPs and without checks and balances, that distance between the electorate and the elected leads to unbridled power in the hands of the prime minister who does not have to answer to the people because they never voted for him – or possibly for her – in the first place.”

And that ‘unbridled power,’ he said, leads to even graver consequences.

“You end up with a dictatorship,” said Smith, who introduced the idea of a change in the political process during a near standing room only meeting of the Rotary Club of East Nassau recently and expanded on the subject during a subsequent interview this week.

The concentration of power in the office of a leader who is not directly elected by the people is especially abhorrent, he said, when dealing with business matters “that should be left to business people who know the rules and regulations, the policy and practices and know what to expect instead of having to deal behind closed doors where policy is decided by a Cabinet minister.”

Deals made in secret put the country and the investor at risk – and create an atmosphere of suspicion and distrust. Unchecked power, said Smith who is among the thousands calling for broader access to information, results in decision-making that bars the public from participating in decisions involving their interests, circumventing or blocking their ability to contribute to discussions about developments that may be in their own back yard.

“The Office of the Prime Minister assumes unto itself unlawful powers to be involved in the business dealings of businessmen,” said Smith, chairman of Save The Bays. “It is not how a democracy and capitalism and a free market economy work…Politicians are not elected based upon their expertise as businessmen. They should not be involved in the negotiation of business deals between private enterprises.”  The government, he believes, should continue to monitor through regulatory agencies like the Securities Commission and URCA.

“It should also expand its regulatory role with greater protection for the environment with an environmental protection act and should ensure that the Health Safety at Work Act is respected or that the Department of Environmental Health Services is properly staffed and funded to be effective in preventing pollution such as what is happening at Clifton Pier,” he said. “But leave the business of business to businesspeople and let the people decide who should be prime minister.”

How business is conducted and oil pollution at Clifton are subjects of two legal actions filed by Save The Bays. the fast-growing environmental advocacy group that has set records in social media with more than 17,100 Facebook friends and over 6,000 signatures on a petition on www.savethebays.bs supporting its principles. Among those principles: an environmental protection act, freedom of information legislation and an end to unregulated development.