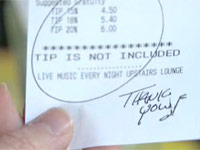 The Melia Resort on Cable Beach is absolutely right in its attempt to be rid of the automatic 15 per cent gratuity that accompanies most cheques at restaurants/hotel properties here in The Bahamas. Frankly, the fact that it is automatic is what breeds this atmosphere where people exhibit bad attitudes and develop an expectation of something for nothing. Why should someone be tipped no matter what? This has led to a spirit of entitlement.

Locals must daily deal with horrible service in this country and, no doubt, many tourists don’t receive the quality service that they expect when compared to what is offered in other like jurisdictions – ie from the attitudes of locals in the shops downtown to the hotels and so on. There’s much to be desired. I don’t think that we fully understand that when someone goes to a shop or a restaurant or an entertainment complex, that part of the experience is their interaction with the people who work at these establishments and so, for example, if the food was a six out of ten but the service was great, one would still return but if the food was a nine out of ten and the service was horrible, one would never return.

Poor service is pervasive in this country. I have heard stories of waiters/waitresses throwing down plates on tables and turning their backs.

This culture of entitlement seems to emanate from politics, where folks feel entitled to their MP bringing a ham and turkey to them every Christmas and that amounting to all the work he/she has to do in a constituency; where once one gets a government job, they are good to go for life and don’t have to perform; where there are monopolies and people don’t work on merit; where one local preacher could proclaim that he thanks God for Pindling because the only degree one needs/needed is to be PLP.

This weekend, I travelled to Abaco and, while I believe this is not representative of most Abaconians, the poor attitudes on display were stomach churning. I caught Albury’s Ferry Services to Hope Town and while Darin Knowles and those were great, the taxi drivers at the site had blocked the parking areas by parking their vehicles across several spaces and proceeded to harass me. I had to drive my rental vehicle around their taxi cabs/vans and squeeze into a space which nearly resulted in the ferry leaving.

This was all while they laughed and grinned like hyenas, making utterances that spoke of my driving or that were disrespectful or that simply were not demonstrative of good hospitality. In fact, I even asked them if this harassment and disrespect was what Abaconian hospitality was about and they asked “what hospitality?” grinning like imbeciles and quipping the entire time. I spoke to Darren Knowles – the operations manager at Albury’s Ferry Services – about it and he told me that he had literally pleaded with local government officials to have the drivers conduct themselves properly, to not park in the selfish and unconscionable manner that they do, to not harass and speak rudely to tourists (domestic and foreign) and to conduct themselves with a level of decorum.

He said that his cries had fallen on deaf ears and that, before I could even relay to him what happened, he began to tell me of similar stories, noting that I was “preaching to the choir”.

Something has to be done at that ferry ramp in Abaco and those taxi drivers – who leave people with a bad impression – must be addressed. As one who has lectured Bahama Host classes, they are clearly in need of at least six months of intense Bahama Host training!

On Saturday evening, as I was leaving Abaco, I approached the Bahamasair desk only to find myself standing there for nearly five minutes without being addressed. Why? Well, the Bahamasair agent – one Felecia – was too busy counting the monies Bahamasair had made that day. She did so openly and I am certain that that is against Bahamasair’s policies. That said, when she was done and had a stack in her hand, she then noted – rather rudely – that she was just about to close the flight and that the flight was about to be on the ground (of course, the flight didn’t land for another 45 minutes). She seemed upset to be performing her job and behaved as if – and her facial expressions are memorable – she was doing a humungous favour. Surely, she needs to be reminded of her role and she also needs to be enrolled in a Bahama Host programme or another programme to address her attitude. I leave that to Bahamasair.

And then there was Burger King on Tonique Williams Darling Highway. I have since spoken to Mr Cash from that fast food chain, who has pledged to look into the matter. That said, I encountered a young lady there who was so distastefully rude and disrespectful to her customer that I wondered where Burger King had recruited this person from. Mr Cash – a director – has been investigating this and he has apologised for this staff member’s behaviour. While I accept and appreciate his apology, I think that such staff members give reputable companies such as Burger King a bad name.

I am a businessman as well and I always tell anyone doing anything for me that service is key. I do not, under any circumstances, want to hear of anyone associated with me mistreating, disrespecting or being rude to my customers. It is via these customers – who all have choices – that my business survives.

On a lighter note, I had dinner at the Dune restaurant at the One & Only Ocean Club on Saturday night. I must commend Darron Bethel, who is a waiter who can teach and train so many others about what it means to render excellent service. Excellent! Bethel was so deserving of his gratuity and the tip I gave … in fact, I felt that I should have had bigger bills on me with how impressed I was of him.

I have since told the General Manager of Dune about him and his service and he should be commended. Kudos to you, Darron Bethel, for you are a bright light among many in the service industry.