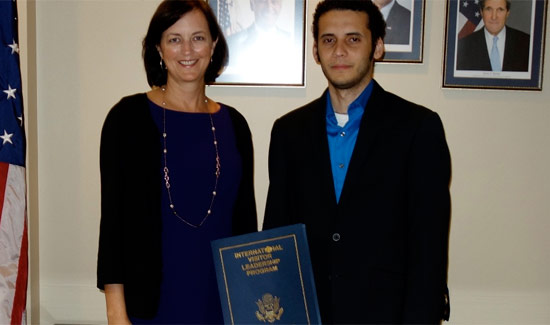 Travis, a journalist at The Nassau Guardian, participated in the professional exchange held in the United States from November 17-December 5, 2014.  The program was designed for investigative journalists, reporters and editors from print, radio and television as well as professors of journalism.

During the professional exchange, Travis, along with twenty media professionals selected from around the world, had an opportunity to visit several U.S. cities including Washington, D.C., Chicago, Milwaukee, Salt Lake City and Tampa Bay to share investigative journalism best practices with their counterparts in the United States.

During the courtesy call on Chargé Johnson, Travis highlighted the impact the IVLP made on his professional career, noting that it was a life changing experience serving as an affirmation of the important role investigative journalism plays in society.

“The importance of a Freedom of Information Act in a reporters work was hammered home during each visit. Various speakers, reporters, editors and professors further spoke of the importance of planning out a potential investigative story.”

He added, “I was a part of a group of reporters that featured a wide array of skills and talent. Some risked their lives in their home countries. Everyone had one focus though, to report the truth and to report accurately.”