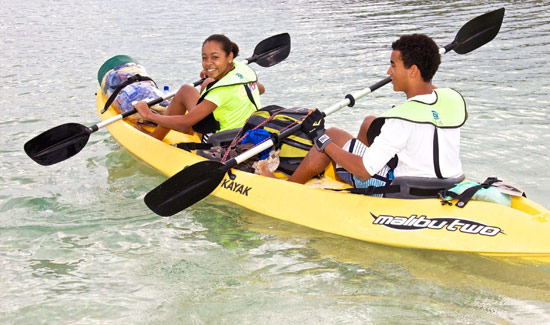 Three teachers accompanied them and a rescue vessel remained on standby during the adventurous journey which began on Thursday, February 12.

It took around 45 minutes for the group to prepare their boats and cargo, and review safety instructions.

Sixteen year-old, Zoe Brown from LCIS utilized the time to calm her nerves and rationalize the benefits of the journey. 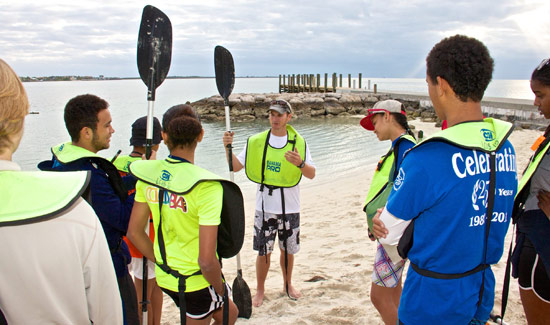 “I’m a little nervous. This is my first long trip so I hope my kayak skills are okay,” she said. “This experience will make me a better kayaker-and I’ll make some new friends, for sure. I’m psyched.”

She wasn’t the only who was a wee bit apprehensive.

“I am nervous about the weather and the waves. We have discovered, as we plan, that things change from day to day,” said LCIS’ Michael Mindorff for whom sibling rivalry was a powerful motivator.

“My older brother did his Gold Award and I can’t let him outdo me. My younger brother is doing Bronze this year. It’s a family thing,” he said. “My teacher told me we will be very proud of ourselves if we can complete this. I am looking forward to the feeling of success.”

“I’m a rower and have two years doing that, so I think I can handle this kayak trip. I love the water, love to be on the water with my friends,” said the 16-year-old.

He feels the typical hiking expedition, synonymous with GGYA, is tougher than kayaking.

“Out on the water it’s cooler and I can splash water on my face to cool down. I love it,” said Brown. “I’m going to be pretty proud of myself when I finish.”

The sea was calm, the sky overcast, as the group pushed off from Montagu Beach around 8am Thursday. Throughout the entire trip they remained visible from shore.

The kayaking adventure is a journey for which they are well equipped. The group completed two practices – one in New Providence, the second in Grand Bahama.

“We then did two days of work together as a team in Clifton Heritage Park cutting a bird watching trail, clearing stumps in an area planned for a petting zoo and re-building a stone wall.” 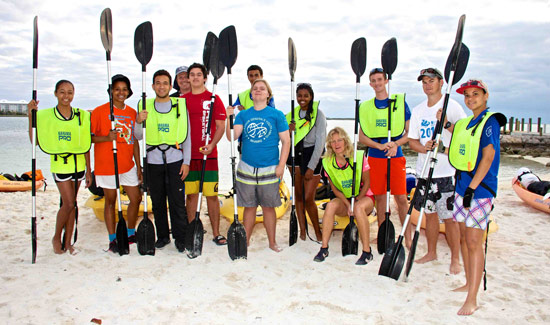 For the second practice, the LCIS students travelled to Freeport, to team up with LIS. Over the course of several days, they padded around the canal, got stuck on mud flats, searched for an elusive blue hole, explored a mangrove swamp, got soaked by enormous wave and generally had an exciting time.

“Our plan for the actual journey circumnavigating New Providence has us covering fifteen kilometres [roughly nine miles] a day,” said Mr Mindorff. “On one of the days in Grand Bahama we completed twenty so we are confident that fifteen kilometres is a reasonable day’s work.”

The group made camp at various coastal sites around New Providence. The trip wrapped up Sunday at Montagu Beach, a day earlier than planned.

“They did very well,” said the GGYA’s executive director, Denise Mortimer. “The only difficulty were the 7-foot waves around Cable Beach between BahaMar and Goodman’s Bay and when they tried to go through the Harbor, they were stopped and waited at the Hilton Beach for us to get clearance.”

She added, “Otherwise a great experience for all.”

“Our first kayaking gold qualifying expedition demonstrates that there other types of adventurous exploration available to our participants. This is a dynamic programme,” said Ms Mortimer.

She explained that units had kayak before, but never for the entire duration of an adventurous journey. Other units are free to do something similar. However, participants would have to underwrite their own costs.

Thanks to a partnership between the GGYA and the Ministry of Youth, Sports & Culture, the youth programme is able to attract more participants across the length and breadth of The Bahamas.