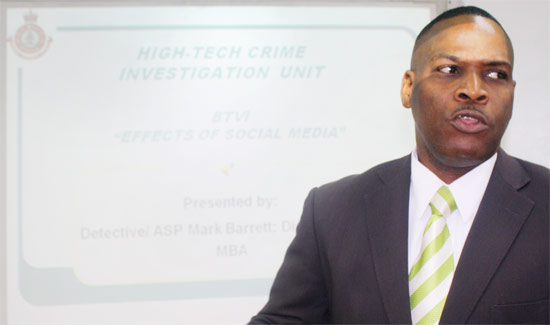 “Think before you post.” That was the simple, yet thought-provoking message Assistant Superintendent of Police, Detective Mark Barrett wanted to ingrain in the minds of students recently.

The officer of 26 years was speaking to an Entrepreneurship Prep class at the Bahamas Technical and Vocational Institute (BTVI) during which time he sent a strong caution to social media users.

“We have to be careful who we interact with. Do you know your 500 followers – people who are looking at your photos each day?” he questioned.

“Yet you’re sharing your life,” he said matter-of-factly to the students.

Detective Barrett, who is in charge of the Business and Technology Crime section of the Royal Bahamas Police Force (RBDF) warned that sharing too much can lead to cyber bullying.  While sharing the pitfalls of social media, the officer urged the class to be responsible when posting photos or comments, adding that cyber bullying is widespread with issues as far as Bimini and Inagua.

“Cyber bullying does not discriminate.  Bullying is not just physical in nature. Words do hurt. Much of what we say, malign the reputation of others; it is a form of bullying. Those words replay in the mind, having a psychological effect,” he said.

The detective said there is the belief that one will have anonymity after writing disparaging comments but defamation of character can result in two years imprisonment and a $10,000 fine.

Surprised by some of the information, Office Administration major Jessica King said it changed her perspective.  “I have over 1,000 friends on Facebook, but it opened my eyes that I need to start deleting some of them. I don’t even know a quarter of them,” she confessed.

“Most shocking was the younger girls posting certain photos. It disturbed me knowing they’re so young.  The wider public needs to know about the dangers involved,” said the 17-year-old.

Her classmate, Antonique Munroe emphasized that such seminars need to be held in schools throughout the country.  “From this year rolled in, I decided to deal with social media differently but after hearing what he said today, I realize it even more,” said the 30-year-old.

“If we don’t know each other, it doesn’t make sense adding each other. I knew things were drastic, but I didn’t know they were this drastic.  It was very informative,” said Antonique.

Meanwhile, Dean of Student Services, Racquel Bethel, said she and her team thought it important to host the timely seminar, particularly as people need to safeguard themselves in this technologically advanced world.

“We want our students to properly manage their social media accounts and not become victims.  Their information goes beyond their circles.  It was a wake-up call for students to realize the devices in their hands may seem personal but hitting the send button releases the power from you to the hands of even predators,” said Mrs. Bethel.

Echoing Mrs. Bethel’s sentiments was instructor, Kramer Taylor, who challenged his students to delete 100 followers from their Facebook accounts who they do not know personally. He too recognized that some people share information that is too sensitive.

“You have folks even in their 30s and 40s sharing information or photos that are unethical or illegal. It’s not the type of culture we want to perpetuate,” he said.