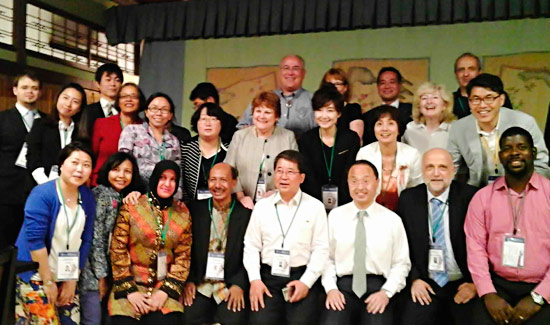 The Annual Meeting of the UNESCO Creative Cities Network (UCCN) was held May 25-28 in Kanazawa, Japan, a member City of Crafts and Folk Arts. Nassau, designated a UNESCO Creative City of Crafts and Folk Arts on December 1, 2014, was represented by Bahamian delegates: Pamela Burnside, President of Creative Nassau, and Gevon Moss of the Downtown Nassau Partnership. During the conference, the Nassau delegation placed a bid to host the 2017 Meeting in Nassau, in competition with Brazil, Paris and Italy. The results will be relayed to the Network within a few months. 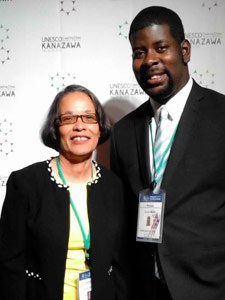 “If we win the bid, the meeting will attract hundreds of persons to Nassau which would certainly provide a boost to our tourism industry and give us a chance to expose our arts and crafts tradition to the world,” Mrs Burnside said. She described the conference as “an amazing experience. The opportunity to interact with sister cities of the Network clearly emphasized how creativity can very easily become the third pillar of The Bahamas’ economy. It can provide not only considerable economic activity for Bahamians, but also offer the unique gamut of creative Bahamian enterprises to stimulate the visitors’ and the local residents’ experience of the country.”

The prestigious conference drew the attendance of 143 delegates from 32 different cities from around the world.  The gathering gave Mrs Burnside and Mr Moss an opportunity to introduce the City of Nassau and the Creative Nassau organization to their counterparts. They interacted with members of the respective clusters (the UCCN, which cover seven creative disciplines, including  Design, Film, Gastronomy, Design, Literature, Crafts and Folk Arts, and Media Arts. In addition to discussing individual and mutual challenges and opportunities with fellow delegates, the Bahamian team participated in the planning of the upcoming 70th anniversary of UNESCO and the new UCCN website, due to be launched by mid-June.

Mr Moss, acting as Mayor of the City of Nassau, participated in the Mayor’s Roundtable Discussion and highlighted the work of the Downtown Nassau Partnership aimed at enhancing the City’s offerings by creating and promoting more creative experiences for the visitor and local patrons in the city centre.

“The DNP’s position has always been that a city has to not only improve its infrastructure and capital improvements, but to also distinguish itself as a unique destination. The only way to do this is to continually provide an opportunity for Bahamians to showcase what is Bahamian. We will continue to partner and connect with others in order to foster an appreciation for the development of our Creative City,” Mr Moss said. 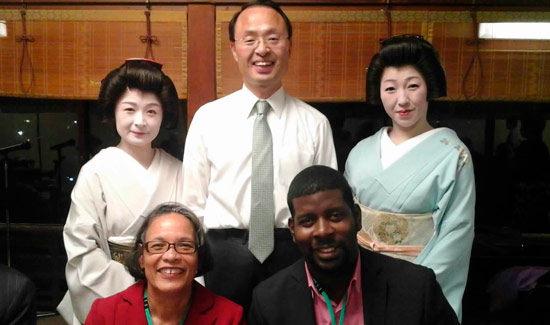 “The importance of the link with this UNESCO programme cannot be overstated”, stated Patricia Glinton-Meicholas, Vice President of Creative Nassau. “Participation at this high level with a United Nations initiative establishes relationships with cities across the globe that share mutual concerns and it can be a great opportunity for learning about product development and global market penetration from long-established Creative Cities. The membership will help Creative Nassau to drive forward our main goals—preservation and development of our indigenous arts and crafts forms to allow many Bahamians across the archipelago to participate more beneficially in our economy with dignity and pride.”

In Kanazawa, as a part of the social programme, the Bahamians were treated to various creative tourism activities which included trips to art museums, historic sites, educational facilities, and traditional Japanese cultural shows. It also exposed the pair to the best of Japanese culinary delights.

Creative Nassau, formed in 2008 by the late Jackson Burnside in collaboration with his wife Pam and a group of Bahamians who are prominent in arts and crafts, is the non-profit entity which has, to date, made a successful application for a city’s membership in UCCN. With Nassau’s designation as a Creative City in 2014, The Bahamas became one of the first of only two small island states in this region to do so.

Photograph captions:
City of Nassau Delegates with other members of the UCCN Cluster of Crafts and Folk Arts from Cities in Japan, China, Korea, Indonesia, USA, Italy and Brazil