When Will The Bec Bribe-Taker Be Charged? 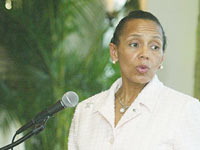 CLEARLY, the statement that a promise is a comfort to a fool is something we all need to take very seriously.

Attorney General Allyson Maynard-Gibson, pictured, seems to know the identity of the person/s who accepted the more than $300,000 inducement from French energy company Alstom (then ABB) in their bid to win a Bahamas Electricity Corporation (BEC) contract. The documents, filed in the US District Court for Connecticut, revealed how the company covertly paid-off an unnamed Bahamian government “official” to win a bid to supply BEC with a generation unit.

Notably, none of those involved in the scheme are named, with the Bahamian bribe-taker referred to as ‘Official 8’.

Today, due to such corrupt practices, BEC is saddled with the very same diesel generators supplied by Alstom, which has no doubt caused BEC numerous problems and extra costs and annoyed and frustrated thousands of Bahamians due to constant outages.

So, if the Attorney General knows the identity of the person/s, why has the bribe-taker/s not been charged? Some would view this as being suggestive of the government either wanting to use this as a political tool or having no intention to charge and/or release the identity of such a person.

The secrecy surrounding the BEC bribe taker/s speaks to the culture of this administration. Information is made available only when it provides a strategic advantage for the government and not otherwise. There is no transparency. Take the Carnival as an example: we were promised a report in the first 21 days after the event. It has now been more than two months and there is still no accounting.

Yes, there seems to be a hope that we forget about these things and since we have proven that, when it comes to politics, we are a forgetful people, it’s a good strategy. So many promises have not been kept.

The Prime Minister promised the Leader of the Opposition that he would be privy to the information concerning the nolle prosequi, asserting that it’s a matter of national security. We have no record of that promise ever being fulfilled.

Will the promise to tell us the details surrounding the contribution of the Sheik to the Progressive Liberal Party’s election coffers years ago ever be fulfilled? Are we ever going to see the documents relative to the V Alfred Gray/Newbold affair?

There is a stench in the air as it relates to the mood of Bahamians. The government needs to take stock and remember that service comes before self.

Comments and responses to ajbahama@