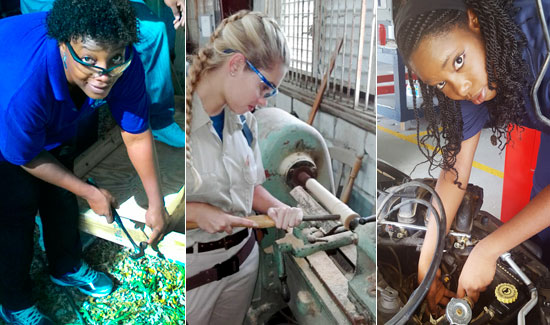 Kelliah Kelly was intimidated the first day she stepped into an Auto Mechanics class at The Bahamas Technical and Vocational Institution (BTVI). She was surrounded by a group of males who wondered whether she was lost. Today, she is one of the top students and has fully embraced her passion for fixing vehicles.

“First, I couldn’t engage in conversation with the guys, but my first semester was fantastic and now, my Engine Systems’ instructor has appointed me as class supervisor,” the 19-year-old stated proudly.

The young woman who initially wanted to become an architect is now in her second semester at BTVI and has already gotten work experience, having landed a Christmas job at Ace Auto. Kelliah, who received an A in the Auto Mechanics Bahamas General Certificate of Secondary Education (BGCSE) exam, said because of the knowledge gained at BTVI, she can change transmissions, fix ignition switches and rebuild starters.

Kelliah encourages other females to make the jump into male-dominated professions, not allowing the gender gap to widen. “Don’t be afraid. Step out and do what you have a passion for. Passion drives you. Follow it,” she advised.

Katie Adderley-Butler agrees. The Inspector at the Ministry of Works is completing her Associate of Applied Science degree in Construction Technology. As a member of the Inspectorate department for over 11 years, Katie knows all too well the feeling of occupational gender segregation; however, she is not daunted.

“There are still some customers who are not open to a woman inspector. And at BTVI, once my male classmates see me take charge and feel I know what I’m doing, they tend to trust me. I always have to be proving myself in a man’s field,” said Katie, who received a certificate in Electrical Installation from BTVI in 1991.

She added that despite stereotypes about women’s abilities in construction trades, as a female in several male-dominated classes, BTVI’s instructors treat her equally.

The single mother, who is a full-time worker and full-time student taking six courses this semester, finds herself encouraging the few other female students she meets in her classes.

“I tell them to learn all they can learn. Get that trade because at the end of the day, they must diversify. As long as they live, learn something new,” stated Katie.

Also joining Kelliah and Katie is carpentry major, Jordanna Kelly. The future sculptor, who has an Associate’s degree in Art with distinction from The College of The Bahamas, said her experience working at Baha Mar made her realize how beneficial attending BTVI would be.

“Two days after graduation, Baha Mar’s Creative Arts Director, John Cox called and I thought I would be a helper in the art gallery. They actually commissioned me to do artwork for Baha Mar’s convention centre,” said the 23-year-old whose work has been displayed in major art galleries locally.

“That was the push to come to BTVI, we were using wooden jigs for welding and my heart is more in installation work – not only paintings on a wall. I want to be more proficient with wood and carpentry overall. Art isn’t just about drawing; there is furniture designing and more. I want to do a lot of glass blowing and welding, exploring different experiences and pushing the envelope,” said Jordanna who received the highest award in the 2010 Art and Crafts BGCSE exam.

Furthermore, Jordanna admitted that her initial experience at BTVI was challenging.

“My first day in carpentry, I came home crying. I was embarrassed. I couldn’t drive a three inch nail with three blows into the wall without being there for 15 minutes trying. Now, I’m at the top of the class. My instructor calls me the foreman. I refuse to be the weakest link,” she declared.

After just one semester at BTVI, Jordanna can cut durock and can handle a table saw, often volunteering to try new tools and being the first to jump on a roof. She said BTVI has made a huge difference in her life.

“I have made so many strong connections between faculty and students; they have so much knowledge. I used to think BTVI was a couple notches below COB, but it’s very organized. It’s a hidden gem,” she said.