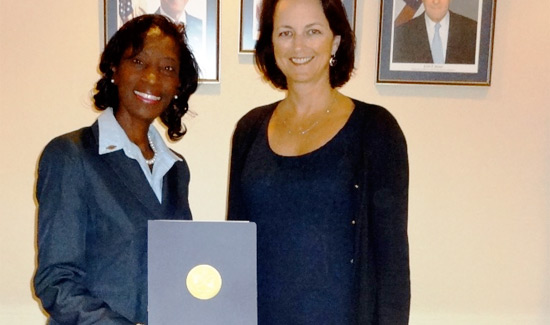 On Tuesday, April 5, Melvelyn Symonette, Senior Assistant Secretary for the Bureau of Women’s Affairs in the Ministry of Social Services & Community Development paid a courtesy call on U.S. Chargé d’Affaires a.i. Lisa Johnson at the U.S. Embassy to discuss her recent participation in the U.S. Department of State’s “Women in the Political and Social Sectors” International Visitor Leadership Program (IVLP) from January 25th – February 12, 2016.

In her meeting with Chargé Johnson, Mrs. Symonette discussed plans to apply her experience to her work at the Bureau of Women’s Affairs and she shared her ideas about future partnerships and ideas for programming to share the knowledge gained from the exchange.

The focus of the IVLP exchange was to examine the U.S. political system and the participation at the local, state, and national levels; explore programs and initiatives that encourage young women to become involved in politics, run for office, and run effective campaigns and introduce the role of women’s organizations in shaping political dialogue and gain an understanding of effective interaction and support among women across various sectors.

The participants also gained insight into legislation and programs that promote equal pay and fair treatment for women in the workplace and promote the value of women’s contributions in the home and as primary caregivers for the young and the elderly and learned innovative ways to introduce initiatives and legislation that address women’s needs in the areas of health and education.