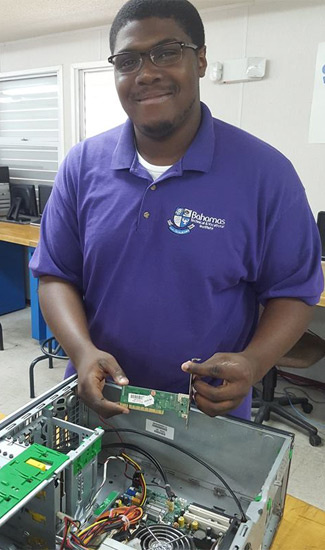 Gerrard Russell is determined to not be average. His pledge from the first semester at The Bahamas Technical and Vocational Institution (BTVI) was to remain committed and dream big.

“BTVI has given me my ability to dream again. After high school, I quit dreaming, but at BTVI, I started dreaming about possibilities,” said Gerrard.

“The instructors are really knowledgeable, personable and they actually care. It’s a community, and as it grows, the students are growing with it,” he stated.

The Information Technology Management and Security Plus major is among the 250-plus BTVI students slated to graduate on the 5th July at Bahamas Faith Ministries International.

Nevertheless, Gerrard did not focus on what he did not have, but what opportunities were in front of him.

“I came to BTVI on faith. My mom used to pay all my fees, but one brother now attends BTVI and the other one is enrolled in home school, so it resulted in less money to assist me. I still had to come up with $600-$700 per semester, so I fixed computers on the side,” he said.

The 26-year-old refused to allow such obstacles to deter him; he used them as fuel to propel him. It is a far cry from what his outlook once was. He admitted that while a student of C. C. Sweeting High School, he threw opportunities away.

“I began skipping classes, but at BTVI, I actually wanted to come to classes. There was this draw (towards BTVI). Here, they focused on my talent. It drove me to the point I fell in love with school. At BTVI, it’s not the old desk and book system. It’s more of an exploration of learning. Besides, after six years in the work world, I needed more than a boss screaming at me,” he stated.

With his eyes on entrepreneurship and a cumulative grade point average (GPA) of 3.7, Gerrard’s career goal is to become a Security Auditor.

“I want to sell security protection. I would hack the system by showing the vulnerabilities of it in an effort to improve upon the overall security,” he proposed.

Additionally, because of BTVI, Gerrard has been afforded opportunities he otherwise may have never received. Earlier this year, he participated in the first Bahamas Telecommunications Company (BTC) hackathon.

In 2014 he was one of two local technical education students sponsored by the Utilities Regulation and Competition Authority (URCA) to represent The Bahamas at the Regional Youth ICT Innovations Training Workshop in Antigua and Barbuda.

Also in 2014, Gerrard was an exchange student at Fanshawe College in Canada. He said the Emerging Leaders in Americas Program scholarship was eye opening.

“I never dreamt I would come to BTVI and go to college for two semesters. I thought I would come through the system, learn some computer repair and graduate,” admitted the institution’s 2016 student speaker.

“Fanshawe really opened my mind. It was so progressive and I learned there are so many more components to IT. I remember the first day of class, a professor gave us a sheet of paper and we had to figure out CISCO switches and routers,” he exclaimed.

Gerrard said because of the exposure, he no longer has a myopic view of the world.
“I now know there is a whole world out there. It is hard to perceive it while here. TV doesn’t do it justice,” he said.

“I cannot go back to the way I use to live. I learned to cook, manage my finances and time, I became independent. I had a Brazilian, Mexican and Indian roommate. I learned about their cultures and how they perceive the world – whether liberal or conservative. I miss them,” he confessed.

Although it has taken Gerrard four years to complete his Associate of Applied Science degree, it is the journey as opposed to the destination that has made him realize the possibilities that exist.

“BTVI gave me much more than a degree. It gave me a hope and a future. Thank you BTVI for giving me a life,” he concluded.

By Hadassah Hall
The Bahamas Technical and Vocational Institution (BTVI)