Ministry of National Security Official honored as a TIP Hero 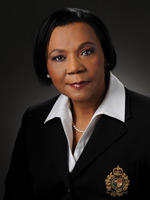 U.S. Secretary of State John Kerry released the 2016 Trafficking in Persons (TIP) Report this morning in Washington, DC.  As required by the Trafficking Victims Protection Act (TVPA), and as part of the U.S. government’s global efforts to combat trafficking in persons, the TIP Report assesses government efforts around the world to prevent modern slavery, to prosecute those who engage in this crime, and to protect its victims.

This year’s Report is the 16th installment of the report mandated by the TVPA and includes narratives for 188 countries and territories, including the United States.  The theme of this year’s report is “Meeting the Challenge: Effective Strategies to Prevent Human Trafficking.”

At the release of the TIP Report, Secretary Kerry honored the 2016 TIP Report Heroes, nine men and women whose efforts have made a lasting impact on the global fight against modern slavery. This year, Ms. Karen Rigby, Deputy Permanent Secretary in the Ministry of National Security, was recognized as a 2016 TIP Report Hero.

Under Ms. Rigby’s leadership as Chair, The Bahamas’ TIP Committee has become a cohesive force in the battle against human trafficking.  During her tenure, the TIP Committee developed victim protection protocols and a National Action Plan that have been showcased in the region as examples of best practices.

Her dedication and unceasing efforts have been instrumental in bringing together and energizing all sectors of the Bahamian government to achieve a coordinated strategy to combat trafficking in persons.