GGYA Explorers Venture Into The Uknown And Find Themselves 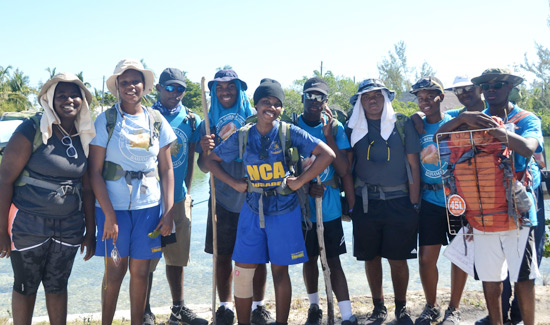 Fresh Creek, Andros – They were definitely out of their comfort zone now. 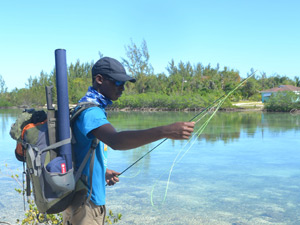 Crackling sounds of the undergrowth and “spooky” nocturnal animals voicing their displeasure with the intruders sent hearts beats racing.

Depth perception was a guessing game. In the distance camp fire lights beckoned. A slight change in direction and minutes later they disappeared.

The occasional whistles and shouts pierced the air during the four hour trek – a reassuring reminder that there were others out there picking their way through this thick, green, seemingly never ending blanket of trees.

For nine participants from Government High School this pursuit of a Silver Award from the Governor General’s Youth Award taught discipline, teamwork and patience, among other character-building virtues. 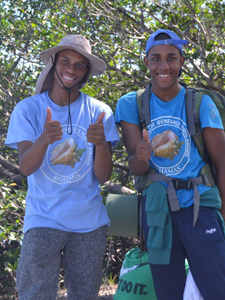 The school saw the number of its participants double this year. At least one educator is keeping her fingers crossed that GGYA could broadly impact the school’s culture for the better and begin to replace national images of school violence in the wake of a violent stabbing on campus last month.

“This shows the public that despite the negativity being portrayed there are good students at GHS who want to be a part of a positive organization that builds character,” says the school’s unit leader, Monique Cooper.

Since 1995, Ms Cooper had been involved with the internationally recognized, self-development programme, which celebrates its 30th anniversary this year. The educator has seen first-hand participants’ positive transformation in personality, fitness level and maturity.

Presently, the school has 45 participants working to achieve their Bronze Award. There are 25 at the Silver level and 10 out to obtain the Gold.

“I think students see the necessity [of the Award]. It brings unity,” said Ms Cooper.

Open to persons age 14 to 24, the Award helps youths and young adults develop vital skills for life and for work, including confidence, commitment and resilience. 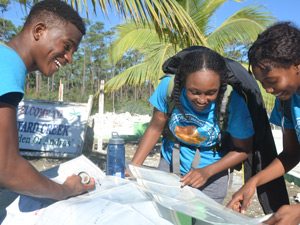 For some, like Government High School eleventh grader Makil Adderley the adventurous journey is the fun part. Still, that’s not to say the hiking component didn’t come with challenges.

Adderley said the Silver qualifying expedition was an experience in patience with tolerance building its outcome. A student athlete and an “outdoorsy” type, he had to slow his pace to accommodate other members from his unit.

“Some people couldn’t walk as fast as me. Some had heavier bags,” he said. “We had to balance that out. I had to let them catch themselves. It’s about teamwork. You’re only as strong as your weakest link so we had to work together.”

It was a similar experience for Ashton M. Cleare, a tenth grader at C R Walker. “We had some group members who were straggling all the way in the back. Do you know what it is to sit down and wait for your other group members and keep a pleasant attitude when they finally arrive?” he queried. “This taught me patience.”

Exactly 115 participants and 14 leaders from eight units spent the weekend, February 24-26, covering 30 miles for those pursuing a Silver Award and 50 miles for those on a Gold practice hike. 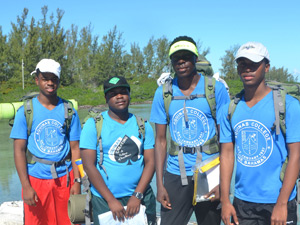 Upon their arrival in Fresh Creek Friday afternoon the contingent stopped at Captain Bill’s Blue Hole before trekking through the Bahamas National Trust Park. Unit leaders admit night hiking undeniably test your skills as well as your nerves.

“It was pitch-black all you could hear was the chickcharnie coming,” said a half-jesting, Clint Johnson, a twelfth grader at Aquinas College pursuing a Silver Award.

“We saw some things crawling around on the ground. We jumped a couple times. We shouted and blew the whistle to make sure we were going the right way, but we had fun though. When we arrived at the camp site we were too happy. We had to work together to accomplish our goal.”

The contingent arrived at Ball’s Campsite around 9 pm. After a cold, seeming long night hunkered down on the forest floor, they broke camp early Saturday morning.

In 11 groups of four to seven participants they trekked to Central Andros High. A daunting task, they covered miles and miles of dusty roads with backpacks weighing anywhere from 20 to 30 percent of their body weight.

A quiet exercise in grim determination, the buzzing of pesky flies, the slap of tennis shoes on pavement and only the occasional, passing motorist provided the soundtrack to the expedition. A mostly monotonous pine forest landscape, there were few homes and landmarks along the way.

“This weekend tested us,” said NCA twelfth grader, Tye Forbes. “But I was confident in myself and my group members that we did the right map work and was on the right path.”

Forbes credits the program with imbuing him with a sense of commitment to himself and others.

“Before, I used to quit many things. I used to play soccer. I quit that. I use to play tennis but I didn’t like to pick up the tennis balls so I quit that, but after a talk from my dad and joining GGYA I started pushing myself to see things through,” said the Silver Award level participant.

“In your group you have your role and your weight to carry. You can’t quit. You’ll let the whole group down.”

An intense and dynamic first-hand education, GGYA’s adventurous journey components have allowed participants like Aquinas College’s Sha-na Rolle and Kevette Todd of CV Bethel High School to experience life in other parts of The Bahamas.

“I had never been on a Family Island until I joined GGYA. This is the second island I’ve been to with the programme,” said Rolle, an eleventh grader who completed her Bronze qualifying expedition in Eleuthera. “I got to see just how beautiful The Bahamas is, the pink sand from Eleuthera and now seeing a blue hole in Andros.”

Twelfth grader Todd is a Gold level participant. Her first Family Island trip was also her first experience on a boat.

“GGYA provides a very interactive experience filled with unique opportunities,” she said. “I’ve always heard persons talked about GGYA. I wanted to experience it for myself so it was the first programme I joined when I reached grade 10. Every hike I think, ‘Why?!’ The feeling of accomplishment after, that’s what, keeps pushing me.”