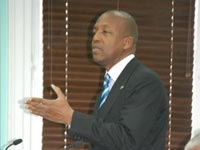 Former Cabinet Minister Alfred Sears says unless The Progressive Liberal Party undertakes fundamental internal transformation, “it is unlikely that the party will regain anytime soon the loyalty of its disaffected members and win the trust of the wider Bahamian electorate.”

Mr. Sears who ran for the position of leader of the PLP before said he was asked by many of the Party’s stalwart Councillors and delegates to contest for the leadership position in the convention currently in progress. He said while he is grateful for the expressions of confidence in his leadership, his experience as a candidate for leader in January 2017, as confirmed by the results of the general elections in May 2017, convinced him of “the urgent necessity for the PLP to reconnect to its core values and institute radical internal governance reforms to create a more democratic, transparent and accountable party.”