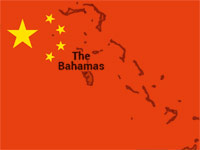 By Nicki Kelly, The Punch

The government, the Opposition and the people of The Bahamas should think carefully before they agree to the terms dictated by the Chinese government as a precondition to financing the Baha Mar project.

The real facts as they relate to the Baha Mar proposal have been purposely obscured in what appears to be a calculated attempt to disguise the true nature of this deal, and its implications for the sovereignty of The Bahamas.

Judging from his past references to the company’s shaky financial condition, and his most recent statement in the House, Prime Minister Hubert Ingraham is well aware of the treacherous undercurrents at play, but feels his hands are tied by the force of public opinion, which is running strongly in favour of the project.

Baha Mar has even mounted a FaceBook page to promote the project, attracting nearly 4,000 supporters who have signed on without any clue to what is at stake.

Mr Ingraham’s mistake was in allowing the Izmirlian family, the principals behind Baha Mar, to seize the initiative and define the narrative through the assiduous cultivation and manipulation of certain members of the media.

Ignorant of Baha Mar’s early history, and having made no effort to inform themselves, those individuals have continued to spin the tale told them, the ultimate goal being to box the Ingraham government into the position where it would have little or no choice but to go along with the demands of the Izmirlians and their Chinese government partners.

In this the Baha Mar claque has been aided and abetted by the hysterical rantings of former Chamber of Commerce president Dionisio D’Aguilar, who, in all his predictions of economic death and destruction if the government does not approve the project, has consistently ignored:

1. Baha Mar’s shaky flnancial position and the Izmirlians’ failure to meet commitments made under previous Baha Mar agreements with the government;

2. The more than $200 million Baha Mar still owes Scotiabank for the initial purchase in 2005 of the three hotels that comprise the current Baha Mar package;

3. The $25 million Baha Mar owes Harrah’s Entertainment and its own legal team following the Izmirlians’ failed attempt to sue Harrah’s for pulling out of the Baha Mar project in 2008;

4. The 2009 default on a $730 million London property development loan made to Izmirlian-owned London Bridge Holdings by the Bank of Scotland.

Instead, Mr D’Aguilar has insisted the government “stop talking down the project and start selling the good parts rather than the negative.” Continuing along that vein, he has asserted that it would be “political suicide for the FNM” not to back the Chinese deal.

So what is the real story behind the demands being made of The Bahamas by the Chinese?

DEMAND FOR LAND: Assuming the Scotiabank loan is resolved, and Baha Mar is able to use its three hotel properties as collateral for its $2.5 billion loan from the Export Import Bank of China, the bank then wants the Bahamas government to transfer 265 acres of government and Crown land to Baha Mar.

But whereas, the government’s 2005 and 2008 agreements with Baha Mar made sale of this acreage contingent on Baha Mar meeting certain conditions, the Chinese are demanding that the Bahamas government transfer the lands in advance of the start of construction no strings attached.

Mr Ingraham is understandably concerned about disposing of the country’s patrimony so cavalierly, especially as Baha Mar’s financial track record, which also includes monies owed the government in the form of various taxes, does not inspire confidence that it will be able to meet its financial commitment to the Chinese.

If it fails to do so, the Chinese government could end up owning a big chunk of Cable Beach – a possibility that no doubt has crossed Mr Ingraham’s mind.

As he told the House last week in discussing the Baha Mar deal: “It is the position of my government that these lands will only be transferred for the expressed purpose of facilitating the development, and should the development not proceed, the land must return to the government.”

That proviso is sure to open up another can of worms, as there is no Heads of Agreement defining the timeline for the start of construction. The net result would be to put the 265 acres in limbo, which will not please the Chinese, and could kill the deal.

However, Mr Ingraham may have just cause for taking this tack if he suspects that the Izmirlians, should they acquire the land, might look for an exit strategy and cut a new deal with the Chinese Export Import Bank that would free them from the financial burden of Baha Mar and leave the Chinese as the new owners of the company’s Cable Beach holdings.

DEMAND FOR LABOUR: As part of its loan agreement with Baha Mar, the Chinese Export Import Bank has demanded that only Chinese labour – 8,150 persons – be used to build the six hotels that will form the core of the Baha Mar project. So while the total development will use 71 per cent Chinese and 29 per cent Bahamian labour, Bahamians will only be working on roadworks and the Commercial Village.

China’s insistence on having so many of its nationals on the job site is linked directly to that country’s need to provide employment for its 1.3 billion people as a means of dampening social unrest. In fact the Chinese government maintains several state-owned recruitment agencies that are devoted to providing Chinese labour to overseas employers.

The Chinese Ambassador to The Bahamas Hu Dingxian admitted as much when he recently told a trade-related meeting that the Baha Mar project “will surely bring a vast number of job opportunities to the people of  our two countries.”

While the Chinese are sure to benefit, the job opportunities for Bahamians will be strictly limited to the peripheral, non-core jobs, as Mr Ingraham made clear in his preamble to a resolution seeking House approval for those 8,150 work permits. “What must be determined,” he said, “is whether the invaluable benefit of skills transfer will occur in a project where contact between Bahamians and foreign experts is likely to be limited.”

There is a second, less apparent reason why the Chinese want to keep Bahamians off the main job site. The Chinese do not want to deal with the wage demands of Bahamian labour unions.

Non-unionised Chinese labour is a lot cheaper. For example: the minimum wage per month for an unskilled Chinese worker in this part of the world is $320; a skilled worker $420; a special skilled worker $500; an engineer $1,200; and an expert $1,500.

Also, if an all Chinese labour force is to build the hotels, will it be according to Chinese building codes and can Chinese standards be trusted. Last year, defective Chinese wallboard cost American homeowners millions of dollars due to noxious fumes that destroyed appliances and caused serious health issues.

There are so many aspects of the Baha Mar project that fly in the face of common sense:

1. The decision to build six hotels at once, when conventional wisdom dictates they be phased in so as not to destabilise the market;

2. The decision to cater to the baby boomers, which has been the market hardest hit by the global recession;

3. The shortage of cash by BEC and Water & Sewerage to fund the necessary infrastructural expansion.

Overall the Baha Mar project is a win-win situation for the Izmirlians and the Chinese government. Not so for The Bahamas.

Copyright 2010 Nicki Kelly
From the “Between The Lines” column in the PUNCH
Monday, September 13, 2010
Reproduction strictly prohibited