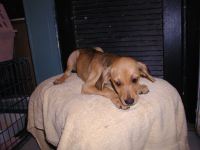 The Grand Bahama Humane Society is looking to fill a $150,000 gap in their funding following a big cutback in support from a major sponsor.

Society executives and volunteers are desperately trying to find ways of drumming up more funding to continue the vital public service the Humane Society provides.

The money pays for rounding up strays, caring for hundreds of dogs and cats, providing a neutering and spaying service and painlessly putting down those for whom permanent homes cannot be found.

Money well spent, especially when one compares it with the Humane Society in Nassau which has a much bigger budget and less to contend with.

With tough economic times and more people abandoning their pets the challenge is only going to get greater.

Tip Burrows, the society’s executive director says one of the big challenges is the perception of some that the society wastes money.

“Many misconceptions exist in the community about our expenses and what people see as perpetual pleas for funding. Most of them have no idea what it takes to operate the shelter. They think that because we have so many animals, we are wasting money,” she told the Freeport News.

“Some in the community evidently even think we shouldn’t have built a new shelter if we didn’t have the funds to run it. We’ve all heard various people who criticize us for not putting more animals down.

“The long and short is – the majority of the public have no idea!”

An announcement will be made shortly about various initiatives which it is hoped will help.