WikiLeaks: How ‘Hurricane Anna Nicole’ Blew Away the Bahamas

The latest scandal from WikiLeaks has to do with how former Playboy model, Anna Nicole Smith, tore through The Bahamas with hurricane force. 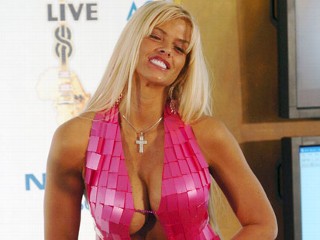 The Bahamas was intoxicated by the antics of the former model and her death unwittingly led to a higher level of government scrutiny, say two cables published by WikiLeaks.

“Not since Wallis Simpson dethroned a king and moved to Nassau has an American femme fatale so captivated the Bahamian public and dominated local politics than Anna Nicole Smith did during her time on the island,” quoted the UK’s Guardian newspaper from a US cable titled ‘Hurricane Anna Nicole wreaks havoc in the Bahamas.’

The document was dated November 15, 2006 and was classified by then Deputy Chief of Mission at the U.S. Embassy in Nassau, Dr Brent Hardt.

“Not since the Category 4 Hurricane Betsy hit the island in 1965, has one woman done as much damage in Nassau,” it said.

Smith came to The Bahamas, to escape the Hollywood paparazzi as she prepared to give birth to a baby daughter.

Instead of escaping the media, she became the biggest news in America for months – making headlines almost daily – while serious news, like stories of the war in Iraq, were relegated to the second page.

One of the biggest casualties was Shane Gibson, a Bahamian Parliamentarian and the Bahamas Immigration Minister.

Gibson, an allegedly corrupt MP who some say amassed a fortune while acting as Minister of Works, had fast-tracked Anna Nicole’s residency permit allegedly for a $10,000 bribe.

She was approved in two weeks, while most people were waiting at least a year.

Gibson denied the accusations but had to admit defeat after the nation’s largest website, BahamasB2B.com, published photos of Smith and Gibson in a “bedroom embrace”.

The pictures were originally published in a local newspaper that didn’t have a website at the time.  Only after BahamasB2B.com brought the stories by John Marquis to the attention of the world did they create such an “intense media frenzy”.

The website also disclosed that Gibson’s father and other family members were likewise benefiting from their relationship with Smith.

Consequently, Gibson was forced to resign his Cabinet post.

“The Anna Nicole scandal has recast Gibson as puppet of the privileged rather than defender of the common people of The Bahamas,” one of the two memos noted.

After her son Daniel’s, mysterious death in September 2006, Doctors Hospital in Nassau “came under fire for its treatment, or more pointedly its complete lack of treatment, of Anna Nicole’s son.”  Daniel died while sleeping in a chair in his mother’s hospital room, shortly after he arrived to visit his mother and his then 3-day-old sister, who Smith later named Dannie Lynn, partly in honour of her dead son.

The court, at first, could not provide a cause of death for Smith’s son. Later, after an independent US pathologist found that the cause of death were the seven different drugs in Daniel’s system, there was widespread “speculation that the government was protecting Anna Nicole from embarrassment by delaying its findings”.

Indeed, the government was covering its own behind as well.  It is alleged that an employee of the government had arranged a purchase of cocaine for Howard Stern and Daniel, although the coroner never mentioned cocaine in their reports.

In an effort to hide details of Smith’s death, the government fired the coroner and disbanded the Coroner’s court.

The memo said the scandals “revitalised” local media to take on a system that “too often rewards the privileged”.

But, the confidential cable adds, the “titillating details of Anna Nicole’s sordid affairs have enticed the Bahamian public to give renewed focus to government indiscretions”.

Like her son, Anna Nicole Smith died a year later, at age 39. She was in a Florida hotel room at the time.

Later, Smith’s stalker/boyfriend/lawyer Howard Stern, and Khristine Eroshevich her former psychiatrist, were found guilty of obtaining prescription drugs under false pretences. The pair used fake names to provide Smith with a cocktail of painkillers, muscle relaxants and antidepressants that caused her death.