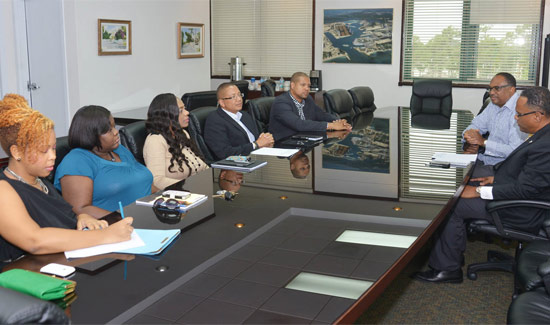 Since July 1st 2014, imports of duty free goods under the HCA under C14 forms are no longer subject to the 1% processing fee.

Regarding press comments as to certain export and other fees on such goods not as yet  having  been removed as contemplated, the Prime Minister reiterated at a Press conference: “The Government honours its commitments. There is no deviation from the intention. I directed this be settled during the course of today.”

Sarah St. George Vice Chairman of the GBPA expressed gratitude and appreciation to the Prime Minister for his message and for the Government’s continuing commitment to Freeport and Grand Bahama’s growth.

GBPA President Mr. Ian Rolle sought reassurance from the Minister that the Government is carefully reviewing all concerns regarding VAT on services  put forward by GBPA and its licencees.

Minister Darville assured President Rolle and his team that, “the  Government has taken prudent steps to ensure that the VAT regime  is consistent with the provisions of the HCA, including having  the  VAT  legislation  reviewed  by  international  tax attorneys  and  receiving  a legal opinion on its applicability with the Port from these attorneys.”  He also indicated that he  has been advised “that the Government’s legal advice on this  matter is that the application of VAT on services provided by licencees does not violate the intent and spirit of the HCA.”

GBPA President Rolle expanded on the contrasting view currently held by GBPA and its licencees, and both parties acknowledged the position.

Both the Ministry of Grand Bahama and the GBPA agreed to further discussions surrounding VAT implementation in Freeport, Grand Bahama.