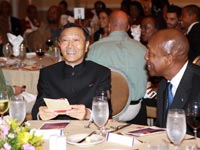 The College of The Bahamas (COB) in collaboration with the office of Chinese Language Council International (Hanban) and the Nanjing University of Information, Science and Technology on October 17, held a ceremony at Sheraton Nassau Beach Resort to launch the Confucius Institute at COB.

COB began to introduce Chinese to Bahamians since 2007. In 2009, Hanban/Confucius Institute headquarters approved the application for COB to establish a Confucius classroom, the agreement was signed in November of that year.

“But it is much more. It is about the language and cultural heritage of the People’s Republic of China,” Dr. Vogel-Boze said.

The Ambassador of the People’s Republic of China, Hu Shan, said that since the set up at the college in 2009, the Confucius Classroom has made positive contributions to the better understanding of the Chinese language and culture by Bahamians, the further development of China-Bahamas friendship and the growth of the plural cultures in The Bahamas.

“I believe that the upgrading of the Confucius Classroom will not only greatly promote the exchanges and cooperation in areas such as education, culture, science, art, and economy between China and The Bahamas, but also deepen the mutual understanding and friendship between the two peoples,”  he said.

We Do Not Need a ‘University’