Family Islands’ Airports To Be Upgraded 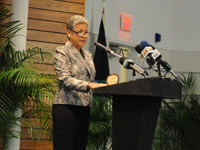 The Government has implemented on a programme to modernise airports throughout the Family Islands according to the growth and needs of those communities.

Prime Minister Perry Christie made the statement during the opening of Phase 2 of Lynden Pindling International Airport on Tuesday, October 16, 2012.

He congratulated Minister of Transport and Aviation Glenys Hanna-Martin, the directors and management of the Airport Authority, the Nassau Airport Development Company, the management company Vantage Airport Group, formerly YVRAS, the contractors and all who worked on the facility.

Hanna-Martin said it was the largest single infrastructural project undertaken by the Government. It was preceded by major runway works, the selection of an airport management company with international experience in airport operations and the terminal redevelopment underway.

“The Lynden Pindling International Airport is critically important to our national life. It facilitates the movement of people and goods to and from the nation’s capital to other parts of our archipelago and indeed serves as a connector to nations worldwide. It is therefore of vital significance to our economy and to our social cohesion as an island people,” she said.

According to the minister, the concept underlining the airport is that the infrastructure should reflect the country’s culture, colours and music. It should provide new economic opportunity through the grant of concessions and the creation of new employment and career opportunities, transfer of knowledge in the field of airport operations, facilitate economic activity, amongst other things.

She said it occurred to her that while Bahamians are disconnected by water, they are connected through air transport in a most wondrous way.

“Airports are important especially to us in The Bahamas not as abstract pieces of steel but as critical engines to strengthening our social and cultural cohesion as one people and also to spark and ignite the economic potential and diversity of our wonderful island communities,” Mrs. Hanna-Martin said.

In this vein, she said that the Government is therefore committed to the archipelagic flourishing of the country and its people.

“We have a rich and diverse inheritance and we in this generation are challenged and charged with the exciting and important task of realising the potential of our people nationwide so as to fuel prosperity and to take our country to great heights,” the minister said.

Speaking to a bust being erected in the likeness of Sir Lynden at the end of Phase 3, the minister said a committee has been appointed chaired by noted historian Dr Gail Saunders, which has shortlisted a number of structural artists who have been invited to make conceptual submissions from which there will be a final selection.

Sir Lynden’s widow, Dame Marguerite and her family will be closely involved in the process. 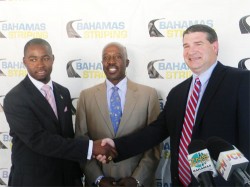