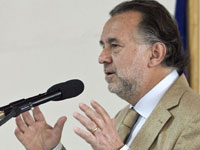 Haiti must focus on strengthening its rule of law institutions, including its national police and electoral council, to consolidate the gains it has achieved in recent years, the United Nations Security Council heard on Wednesday, as it reviewed developments in the Caribbean country.

“The political process in Haiti remains vulnerable to setbacks linked to political instability, lack of respect for the rule of law and unmet social grievances,” Secretary-General Ban Ki-moon noted in his latest report, which was presented to the Council today by his special representative for Haiti, Mariano Fernández Amunátegui.

“In this context, I urge the new government to do its utmost to continue to strengthen the country’s rule of law institutions and to redouble its efforts to combat unemployment and poverty,” the UN chief added in his report, which also recommends an extension of the mandate of the peacekeeping force there, the UN Stabilization Mission in Haiti (MINUSTAH).

Ban also praised efforts by Haiti’s new government, headed by President Michel Martelly, to combat corruption and smuggling, create jobs, attract foreign investment and improve socioeconomic conditions for Haitians. However, he underscored that much remains to be done to address other pressing issues, such as extreme poverty and insecurity.

In particular, the secretary-general noted that the strengthening of the Haitian National Police is a main priority for MINUSTAH as this will help to consolidate the rule of law and security conditions in the country. In addition, it would pave the way for the mission’s eventual withdrawal from Haiti.

“We can classify the security situation as stable but with the fragility appropriate to a society going through a stabilization process, with precarious socio-economic indicators and with extreme poverty affecting important sectors of the country,” Fernandez said in his briefing to the Council, adding that politically-related violence had, for all practical purposes, ended.

The special representative, who also heads MINUSTAH, outlined a consolidation plan that has been created in conjunction with the Haitian government to reconfigure and gradually reduce the mission’s military presence and give a stronger security role to national police forces.

Fernandez also pointed to the importance of establishing a Permanent Electoral Council, adding that MINUSTAH and the international community are currently working to facilitate a dialogue to set up a legitimate council that will then lead to elections of members of the Senate, mayors and municipal officials. The process for these elections has been at an impasse since May.

The UN envoy told the Council that the cholera epidemic, which has affected the country since late 2010, remains a serious challenge, with new cases still being reported continuously, many having fatal consequences.

“The epidemic affects the entire island and we are working on a plan to intensify prevention, advance the fight against the disease and carry out all necessary measures to mitigate its effects,” he noted. MINUSTAH has been mobilizing its logistical resources to assist in the effort to contain the epidemic.

MINUSTAH, Fernandez said, is working to improve the country’s education and infrastructure, promote peaceful coexistence in communities and reduce violence.

“After eight years of MINUSTAH’s work in Haiti, the achievements are evident. However, to continue making progress, we must boost efforts of state consolidation that allow the harmonization of the peace dividends obtained until now,” noted the special representative.

He added, “Finding paths that facilitate dialogue and consensus among Haitians is an essential factor to build a country that can stand on its own, with democratic institutions that can respond to numerous challenges today and in the future.”

The Security Council established MINUSTAH in June 2004. In addition to helping support Haiti’s authorities with recovery efforts in the wake of massive earthquake which struck in January 2010, and following the completion of presidential elections in 2011, the mission has been working to fulfil its original mandate to restore a secure and stable environment, to promote the political process, to strengthen Haiti’s government institutions and rule-of-law-structures, as well as to promote and to protect human rights.

Speaking to reporters after the meeting, Ambassador Gert Rosenthal of Guatemala, which holds the Council presidency for this month, said there was unanimity among Council members regarding the need for an extension of MINUSTAH – whose mandate expires on 15 October – for another year.

There was also unanimity on the recommendations of the secretary-general “to move away from peacekeeping in the area of troops towards strengthening the police force in Haiti,” he added, noting that Council members also recognized important progress domestically, in terms of the formation of a new government, “which seems to be working in a very coherent manner.”

Haiti must focus on strengthening its rule of law institutions, including its national police and electoral council, to consolidate the gains it has achieved in recent years, the United Nations Security Council heard on Wednesday, as it reviewed developments in the Caribbean country.