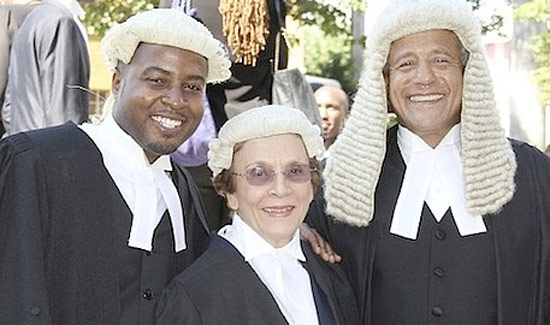 Tribune columnist Adrian Gibson was one of 24 new attorneys given the legal right to practise law in the Bahamas after they were called to the Bahamas Bar October 29.

At the first session in the Supreme Court Wednesday morning, Mr Gibson was robed and wigged by Tribune Editor and Publisher Eileen Carron, the oldest living woman member of the Bahamas Bar. Mr Gibson’s petition was presented by Queen’s Counsel Fred Smith.

Mr Gibson, who had been chosen by his peers to reply to the Chief Justice, Sir Michael Barnett, on behalf of the new attorneys, made a point of thanking families and loved ones who had supported them during their years in law school, who he said “were so understanding and who catered to us whilst we toiled and moved from strength to strength, from exam to exam, from hanging out one minute to having to nearly cut everyone off and disappear into solitary confinement to study and pass the many exams we had to take to cross the threshold of becoming eligible to join this noble profession. We have laboured in the vineyard and are today beginning to reap the fruits of such industrious efforts.”

He also praised the staff of the Eugene Dupuch Law School and its principal Tonya Bastian-Galanis for their help and promised that the new attorneys would “uphold the highest integrity of this noble profession … adhering to rules and regulations and adamantly adhering to codes of conduct”.

Addressing the Chief Justice he said: “Sir, we hope that when you and your colleagues on the bench sit and chat about us, that it will be positive and that we make a lasting impression upon you for the better.”

He dedicated the moment of his calling to the memory of his uncle, Aaron Gibson, who died in a traffic accident in Long Island in 2011 and “who was one of my greatest inspirations and to my family-at-large”.

He also paid tribute to the inspiration of his grandparents, Edward and Lenora Gibson, who had travelled from Long Island for the occasion.

Mr Gibson, who was a journalist at The Tribune and writes a Saturday column for the newspaper, said it had been an honour to have Mrs Carron – who was called to the Bar in 1962 – and Mr Smith participate in the ceremony, describing them as “his idols”.

Ten more attorneys will receive their robes and wigs in the final call.