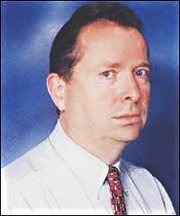 Another victim’s family has been denied justice and another murder goes unsolved in The Bahamas, where a corrupt and dysfunctional legal system allows criminals to get away with anything… even murder.

Mr Jones was shot twice in the back of the head as he got out of the car after pulling into the parking lot of his Compass Point office on West Bay Street.

Despite compelling evidence by the prosecution, including a palm print left at the scene of the crime and eyewitnesses who placed Mr Stubbs at the scene before and after the shooting, the jury handed down a 9-3 not guilty verdict.

Ever since the unsolved murder of Harry Oakes, Bahamian government officials, police officers, lawyers  and court employees have perverted the Bahamian legal system.

Out of the hundreds of murders committed over the past few years, only a handful have ever been prosecuted effectively.

In many cases, the police arrest someone just to make the headlines stop.  They know they don’t have a case, sometimes they know the person is innocent, but making an arrest makes them loook good and it stops the media from talking about the case.

Then, crafty Bahamian lawyers wheel-and-deal behind the scenes to postpone the case until it is all but forgotten.

Many months, sometimes years later, the government tries to quietly bring the case to trial, knowing that most people have forgotten about it and the sensationalism has died down.

It appears this was the strategy used in the Hywell Jones case, which at the time of the incident was international news.

In most of these high-profile cases, the government seems compelled to stop the bad press that might negatively affect tourism, so they arrest someone, anyone, just to make the headlines stop.

Years later they bring the case to trial, giving prosecutors time to fudge the evidence, suspects time to intimidate and murder witnesses and defence lawyers time to manipulate the jury pool to their advantage.

The result is more like a bad stage play than an actual trial but the acquittals receive far less media exposure than the actual crimes, so it works out well for the government, but not so well for victims’ families.

And not just murders.  The trial of Senator Pleasant Bridgewater and her accomplice, who tried to extort movie star John Travolta, ended the same way.  A scripted ending that resulted in a mistrial with the government knowing that Mr Travolta would never agree to a painful second trial.  Problem solved. And “legally” – without a sitting senator going to jail, which would have resulted in a lot of bad press for The Bahamas.

The little Gallagher boy who was murdered on the beach on Paradise Island.  The government put the family through hell before skewing the case to the extent that a conviction would have been impossible.  The murderers, who were relatives of top government officials, were never convicted, the family never received justice.

These are but a couple of examples to show how a dysfunctional legal system allows criminals to get away with anything and reinforces the fact that criminals have it “better in The Bahamas”.