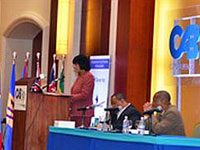 The prime minister of Jamaica, Portia Simpson Miller, has again called on Caribbean Community (CARICOM) leaders to “put their collective minds together” and recommit to the process of regional integration.

“It is… in our interest to note that a common voice from CARICOM will have a greater chance of gaining recognition in international fora, than the voice of any individual country,” she stated.

The prime minister, who was addressing the Caribbean Association of Banks (CAB) conference held recently in Montego Bay, Jamaica, said that, while there has been a neglect of the process in recent years, the administration is unequivocal in its support for regional integration.

“I do not mean this as a ‘pie in the sky’ approach to issues. Rather, it should be apparent that for a whole host of challenges, which we all face, they apply not just to individual countries, but to the region as a whole. As such, there is inherent value in putting our collective minds together in overcoming the challenges,” she argued.

She observed that there are several areas where common sense would call for a commitment to regional integration.

“If I may speak specifically about the (banking) sector, there is a unique chance at this particular point in time for us to be able to remove any doubts, which may be lingering in the minds of our external partners, about the commitment of regional governments to strong and effective regulation of our financial sector. In a sense, let us recognize that this is not a time when one country can say to the outside world, ‘look at my regulatory system – I am better than the rest,” she argued.

She said all member countries and their leaders should seek to establish, throughout the region, uniform compliance by financial institutions to the highest standards of fiduciary responsibility.

“There is no benefit in seeking to outdo your neighbour by relaxing vigilance. The reality is that any benefit realized from having more relaxed rules than your competitor will only be short lived. What I say to you directly is that, you have an opportunity to establish very clearly that the Caribbean’s regulatory system for the financial sector can (compare) with that which obtains anywhere else. There is only one class which counts at this stage and that is to be ‘world-class,” the prime minister stated.

Mitchell Reports on CARICOM in Haiti