Education Minister: What Are Kids Being Prepared For? 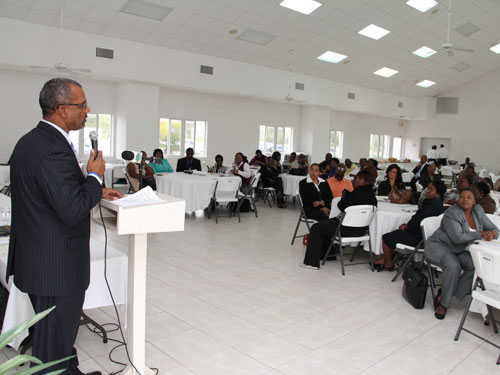 Minister for Education, Science and Technology Jerome K. Fitzgerald said November 29 that the primary purpose of all who are involved in education should be what are the children being prepared for.

Mr. Fitzgerald was in Grand Bahama participating in the opening of the National School Board Association’s Training Seminar/Workshop being held at the Eric Sam Hall of the Church of The Ascension.

In the one-day event participants from the various school boards on Grand Bahama discussed; why school boards are important, deficiencies in the school boards and school accounts/audit reports, contracts, scope of authority, the Education Act and more.

Mr. Fitzgerald told the gathering that he loves coming to Grand Bahama because of the enthusiasm the administrator, teachers, parents, students and school boards display toward education.

The Education Minister missed an emergency meeting of the Cabinet Thursday to be with the school boards, emphasising that he had informed Prime Minister Perry Christie that he had committed to coming to Grand Bahama to address the School Boards, and how important it was to him and to the Ministry.

Minister Fitzgerald said he also wanted to be here to congratulate the School Board members and to inform them that the full support of the Ministry and the Government “is not only behind you but behind education.”

Continuing he said that is very good to come into education where the Government has made the biggest commitment to education over the past 20 years.

“And, rightfully so because we are at a time in our development, we are coming up on 40 years as a sovereign nation and as an independent people, and so there are a lot a things we are at a crossroads right now, so this is an opportune time and me as minister, I am grateful for the opportunity I have been given to serve in this capacity,” he stated.

He informed that only last week he was at a school in Freetown, East Grand Bahama for a function and commented how refreshing it was to see those young kids, three and four years old singing and welcoming us, and speaking so eloquently, even at that age, and with those bright eyes.

The Education Minister noted that one would look into their eyes and ask what does the future hold for them and where do they see themselves going. According to the Minister, both he and the Minister for Grand Bahama, Dr. Michael Darville shared that thought.

Both coming from the private sector, and like many, making a personal sacrifice to serve, the Minister said “it is days like that that make us realise that we made the right choice. And at the end of the day sometimes it is not all about self-gratification, but it is about helping others, particularly those young ones to achieve their objectives.

“And so I tell people everyday this is the best job I ever had. I enjoy it, I love it. I dreamt one day of being Minister of Education and never thought it would happen, because I said some of the things I would like to do might be too radical. But I think at the end of the day we accept that some changes need to happen,” he said.

The Minister added that moving forward over the next couple of months they are going to be communicating to the administrators and to the public some of the restructuring that is going on within the Ministry of Education, mainly to ensure that some of the policy objectives that have been set out are able to be implemented, and so there will be clear lines of accountability and so forth.

But more critical than that, the Minister said they are really now going to start looking at “what we want our kids to look like when they come out of school? What skills do we want them to have, not only academically, but socially, the levels of respect, spiritually and so forth?

“These of course are all things that go into making up the child. We have to look at changes in the curriculum, what areas we need to focus on, how much more time should we spend in vocational study, how much should be directed to that, how much should be going on apprenticeship programmes and so forth outside of the school?

“So we are really going to start to give serious, serious consideration to that to ensure that we have a clear vision of what the functions of school are and what we want as Bahamians to see the functions of our school, so that we know what we are going to produce at the end of the day,” he stated.

He added that his ministry is going to be getting a lot of input on that and he encouraged School Board members to start thinking about it, because it is their intent to get all stakeholders involved in the direction education is going.

“Our children’s education is first and foremost and as I said, for many of us this is a job that is not easy, and in a lot of cases may not get the remunerations we want. Most of you are volunteers, if not all, but you have the interest of our children and our country at heart,” he stated.