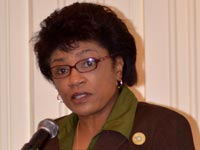 The United Nations Environmental Programme (UNEP) opened a three-day regional journalists’ workshop Oct. 15 to train media professionals on the benefits of pursuing Inclusive Green Economy that educates the public about the Montreal Protocol on Substances that Deplete the Ozone Layer. The seminar was held at the British Colonial Hilton Hotel.

Mrs. Lorraine Armbrister, Permanent Secretary for the Ministry of the Environment and Housing, welcomed the Caribbean Journalists on behalf of Minister Kendred Dorsett, who had a previous commitment off the island

“We in The Bahamas noted with great interest the fact that only a few weeks ago on September 16, 2012, the Montreal Protocol celebrated its Silver Jubilee, marking 25 years since its inception,” said Mrs. Armbrister. “We are indeed pleased that you have chosen The Bahamas for this very important meeting.   You will all be aware that the Montreal Protocol seeks to preserve the ozone layer, by phasing out all ozone depleting substances.   During the last 25 years, there have been a number of successes both nationally and globally.”

Mrs. Armbrister said  UNEP celebrates its universal membership, phase-out of 98 percent of ozone depleting substances, achieving close to 135 gig atones in CO2 emissions savings, the Global phase-out of chloro-fluoro-carbon (CFCs) by 2010 and the benefits for human health and the environment.

“To date, the Montreal Protocol is the most successful multi-environmental agreement in the history of the United Nations.   The Global Community has seen a dramatic reduction in the cases of skin cancer and cataracts and dollars spent on health care due to the controls enforced under the protocol.   There have also been significant climate benefits.   Ozone Depleting Substances (ODS) are also global warming gases, therefore the decrease in the production and use of ozone depleting substances resulted in a reduction of 25 billion tons of carbon dioxide between 1990 and 2000,” said Mrs. Armbrister.

She said that despite many successes, governments still face major challenges such as the phasing out of the use and production of hydro-chlorofluorocarbons (HCFCs) by developing Article Five countries, and providing training for industry technicians and regulators.

Mrs Armbrister spoke about the legislative foundation for the national ozone unit to collaborate with the Bahamas Customs Department and train more than 250 customs officers in the key areas needed for the detection of the destructive gases at the nation’s borders. Both departments will continue this collaborative effort, by training all new customs officers for the foreseeable future.

“The donation of 16 refrigerant identifiers from the United Nations Environment Programme allowed over 300 customs officers to be trained in the use of these machines at all ports of entry in The Bahamas,” said the Permanent Secretary.

And she emphasised that considerable effort has been made by the government to ensure that the highest level of technical training is made available for local technicians through the Bahamas Technical and Vocational Institute (BTVI), and the refrigeration service engineers society that over 1,800 technicians have been trained in good practices and in the handling of ozone depleting substances.

“Public awareness has also played a vital role in the success of the Montreal Protocol in The Bahamas.   Many initiatives aimed at educating our young people about the importance of preserving our ozone layer have been undertaken. A number of presentations have been held at various primary and secondary schools, using a multiplicity of methodologies such as stories, prizes, quizzes, and even puppet skits. The Government of The Bahamas is keenly aware of the fact that targeting the next generation will ensure that the success of the Montreal Protocol remains sustainable in The Bahamas.”

Public awareness is also one of the major challenges being addressed through the workshop. UNEP seeks to sensitise media professionals by strengthening their skills on environmental journalism, providing relevant information, tools, and inputs for transmitting messages about environment protection and governance in the Caribbean.

“I am certain that the information provided will be useful and timely, and that each of you having being empowered, will promote the message of environmental protection. It is my distinct pleasure on behalf of the Honourable Minister of the Environment & Housing to declare this workshop officially opened,” said Mrs. Armbrister. 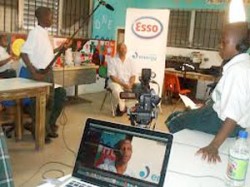