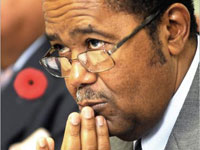 Minister of Health Dr. Perry Gomez has appointed a task force to produce recommendations for the regulation of stem cell therapy, which was banned in The Bahamas by the Christie administration a few years ago.

Gomez said the increasingly popular and effective medical procedures, once fully implemented in The Bahamas, could enhance medical tourism.

Dr. Duane Sands, a cardiovascular surgeon and member of the task force, said The Bahamas could become a premier destination for stem cell therapy.

“We want to ultimately lead the world in the development of this new industry,” said Sands at a press conference at the Ministry of Health yesterday.

“Bear in mind that the United States has had some challenges in part due to the political proclamations of George W. Bush that slowed down stem cell research.

“So there are opportunities and if it is done right, done ethically and done with real attention to the moral implications, The Bahamas and the Bahamian people can not only accrue some benefits, but we can advance medicine in the world.”

Sands noted that medical tourism internationally is a huge industry. He said it accounts for as much as $70 billion per year.

“When you imagine the potential for medical tourism, the question is whether a new jurisdiction like The Bahamas can combine science with ethics and morality,” he said.

Stem cells are undifferentiated cells that have the capacity to renew themselves and to differentiate into various cell types, such as blood, muscle and nerve cells.

Under the former Christie administration, then Minister of Health Dr. Marcus Bethel halted stem cell procedures at the Immuno-Augmentative Therapy clinic in Freeport, saying it had not secured the necessary approvals to engage in such research in 2004.

Asked why the government has now decided to regulate the industry, Gomez said there is no doubt that stem cell therapy has many advantages.

“So for one who likes science and believes science is the basis of all good medicine, that’s why we are looking at it,” he added.

Gomez said many physicians in The Bahamas want to use the new technology.

Managing Director of the Cancer Centre Dr. Arthur Porter, who chairs the task force, said the government is taking the right steps.

“We feel that stem cell therapy is probably going to be the very important therapy for the next generation,” Porter said. “And how it’s handled, how research is conducted, how applications are used is going to be extremely important.”

He said the task force will look at all the ramifications before any regulations are recommended.

The committee is expected to deliver its report within the next 60 days.