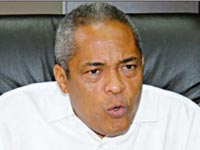 A senior government official in Trinidad & Tobago says web shops should not be legalized in The Bahamas, and instead suggests that the Progressive Liberal Party (PLP) create its own national lottery. Louis Lee-Sing, the mayor of Port-of-Spain, told Guardian Business that gambling houses should not have been allowed to function in the first place.

While The Bahamas has the potential to generate billions in revenue, gambling must be transparent and compliant with the law. And the best way to achieve that is through an online national lottery.

“People can’t be allowed to run their own rackets,” Lee-Sing said, mayor of the Caribbean nation’s capital city.

“And I sense that the government, rather than going the way of legalizing the web operators, should be introducing a national lottery. Of course, the web operators could very much be a part of the national lottery, because if they are taking bets now for other kinds of games, they will be permitted to take bets for the lottery by putting in a terminal. But they would not have control over the terminal, and they won’t be able to fix the numbers or the games. All of that will be based on a set pattern that is scientific and all-embracing.”

The candid comments are likely to send further shockwaves through a country grappling with the issue of gaming. Lee-Sing was a speaker yesterday at an event held by the Bahamas Institute of Chartered Accountants (BICA).

The major of Port-of-Spain speaks from experience.

Between 2010 and 2012, the national lottery in Trinidad & Tobago reportedly generated an estimated $5 billion in local currency. The highest contributing game is a traditional numbers game that’s online- based.

Lee-Sing believes the approach would make gaming more successful in The Bahamas, as more individuals are likely to play after the “cleansing of the game”. He told Guardian Business that key factors the government must consider are transparency and compliance.

“It has to do with sitting down and working out ultimately what the compliance will be based on, the plan that you have. If you have one game and 20 terminals, with the 20-plus inhabited islands in The Bahamas, you would get approximately 600 terminals. So you will need compliance officers to look at what is going on in each jurisdiction to ensure that it is working according to the letter of the law,” he pointed out.

“Once transparency is there and people know if they buy a ticket, it will go to the well-being of the country or towards some special project, people will know what they are making a contribution to. Proper and organized employment will be created at varying levels and there would be strict adherence based on compliance, so everybody benefits.”

Jerry Butler, principal for JC Butler & Co., revealed to Guardian Business that the government should be managing a national lottery that properly dictates who the winners are and the revenue collected from the games.

“The government should be managing a national lottery that properly states and dictates who the winners are, sets money aside for those who have gambling habits and really transfers voluntary taxes, meaning the day-to-day dollars that people are gambling with to social sectors that are in need of it like healthcare, education, sports and the diversification of the economy,” he explained.

“If the people are willing to pay a voluntary tax, whether it’s a dollar a day and you can accumulate that, you will make one or two people millionaires, and take that accumulated money for the better good.”

Butler added that he wants the government to ensure Bahamians will have an opportunity to play a major role in the ownership of the country’s gaming business.

“I would think that the state should be doing that, as opposed to a small number of renegade entrepreneurs. I just came back from Trinidad & Tobago and it always interests me in places like that, Barbados and Turks & Caicos, where you meet locals operating casinos. They are licensed to operate casinos, numbers games and even mini-lotteries etc.,” he added.