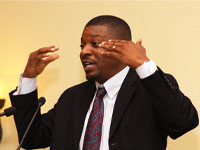 The government’s mortgage relief plan has only impacted three percent of the 4,000 Bahamians whose mortgages are in arrears, something former Minister of State for Finance Zhivargo Laing said proves how “pretentious” the government was in crafting the initiative.

Minister of State for Finance Michael Halkitis revealed on Tuesday that only 150 mortgage-holders qualify for the plan.
He noted that there were around 400 applicants.

“Any pretense that there is some plan out there that could rescue hundreds and hundreds of people from the situation that they are in when an economic crisis brought them into that situation really is pretentious,” Laing said Tuesday.

“I thought it was really a selling of false hope to people in the first place. The one reality is hope deferred makes the heart sick and I imagine that out of this mortgage relief plan there will be many sick-heart people because they have gotten an
expectation that cannot be fulfilled.”

The Progressive Liberal Party (PLP) revealed a 10-point plan while in opposition that included pledges to get local banks to agree to a 120-day moratorium on foreclosures and to write off 100 percent of unpaid interest and fees for those facing foreclosure.

In its original plan, the PLP also said it would encourage banks to reduce the interest rate on the mortgages in question to prime plus one percent.

The PLP also pledged to guarantee interest payments for affected borrowers until 2017, if the banks agreed to their requests.

However, these details were not included in the modified mortgage plan, which was later presented to Parliament.

Sands said the party was not responsible in its promise.

“I think what we have is an example where the PLP said a lot of things in order to get elected. I suspect that they knew that this could not be accomplished.”

Halkitis said the government only expects about 1,000 Bahamians to qualify for the relief plan. An appeals panel appointed by the Ministry of Finance has met with the Clearing Banks Association to find ways to tweak the plan so more homeowners will be eligible, he said.

Laing said when the Ingraham administration looked at the mortgage relief issue it consulted the banks and learned that they were already doing “as much as could be done” to help those in need.

He said the only other way the government saw to help homeowners in arrears was to commit government funds to help pay off the debt, which is untenable.

“I believe it would be very difficult to have any program that provides relief to the thousands who find themselves in difficulty basically because the economy is still not meeting their need which is a good paying job that allows them to pay their mortgages,” he said.