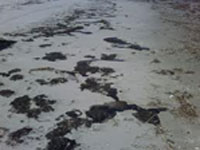 After receiving a number of phone calls from worried beachcombers yesterday, The Freeport News team went to Coral Beach to discover the extent of the contamination.

We saw droplets, ranging in size, scattered about the beach. Tourists who had been soaking up the morning sun were attempting to remove tar from their hands and feet after walking on the sand or swimming in the ocean.

Asked about it, they said the droplets of tar has been noticeable since Thursday. Yesterday, local officials confirmed they are checking the beaches while the clean-up at sea continues.

It was on Monday when the MSC Eugenia left the Freeport Container Port en route to Port Everglades and reportedly suffered some damage to its hull around 4 a.m. The spillage was discovered a short time later.

Initial reports said there was no spillage in the channel and the ship was taken further away from the harbor to ensure the oil did not make its way on to the shoreline or impede cruise ships and other container vessels.

In a press conference in Nassau on Monday, Glenys Hanna-Martin, the Minister of Transport and Aviation, described the accident as a tier one (T1) spill, the lowest on a scale of one to three.

A report from the Government said the MSC Eugenia is berthed at Freeport Harbour, being prepared for dry-docking.

Minister of the Environment and Housing Ken Dorsett was quoted as saying: “During the transfer of the fuel remaining in the vessel’s tank, three layers of containment booms were deployed to militate against possible release into the wider environment.

“Nevertheless, agencies of the Government were immediately mobilized for oversight.

“Our focus was, and is, on remediation measures to protect the environment.”

The Minister also said that response company, Resolve Marine, was advised against using a chemical dispersant to accelerate the dissipation of the released fuel.