Antigua-Barbuda To Pursue Trade Sanctions Against US 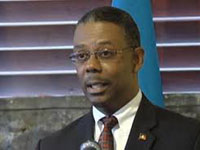 On Monday, January 28, 2013 in Geneva, the Caribbean nation of Antigua and Barbuda was granted authorization by the World Trade Organization (WTO) to suspend certain concessions and obligations it has under international law to the United States in respect of intellectual property rights.

Having initially received preliminary authorization to do so from the WTO in 2007 and negotiating with the US government for a settlement of the case over the course of the last five years, Antigua is seeking final WTO approval of its sanctions in order to compel the US either to comply with the rulings in Antigua’s favour in the gambling dispute or to negotiate a fair and reasonable solution with the Antiguan government.

For nearly a decade, Antigua has sought to resolve the dispute with the US government over the US failure to abide by American treaty obligations with regard to remote gaming.

“The economy of Antigua and Barbuda has been devastated by the United States government’s long campaign to prevent American consumers from gambling online with offshore gaming operators. These aggressive efforts to shut down the remote gaming industry in Antigua has resulted in the loss of thousands of good paying jobs and seizure by the Americans of billions of dollars belonging to gaming operators and their customers in financial institutions across the world. If the same type of actions, by another nation, caused the people and the economy of the United States to be so significantly impacted, Antigua would without hesitation support their pursuit of justice. We once again ask our fellow sovereign nation and WTO member, the United States of America, to act in accordance with the WTO’s decisions in this matter, before we move forward with the implementation of the sanctions authorized this day by the WTO,” said Harold Lovell, Antigua’s finance minister.

At its height, the remote gaming industry in Antigua was the country’s second largest employer, and leading international gaming economists estimated that the industry was worth over US $3.4 billion to the Antiguan economy. Having once employed over 4,000 people, today less than 500 persons are employed in the gaming sector. This economic devastation has been caused by the direct actions of the US.

Fees paid by the gaming industry helped fund public education, healthcare and the country’s infrastructure, and the income boosted consumer spending and other economic activity associated with a vibrant, high-tech industry.

“Antigua has decided to utilize its right under international law to compel treaty compliance by the United States. This decision did not come easily. After countless proposals from our government have been more or less ignored by the Office of the USTR — numerous decisions by the WTO declaring the United States government’s position illegal — and failure of the United States government to provide meaningful proposals to end the dispute, the WTO provides this remedy not to encourage illicit behavior by nations; but rather to provide them with a way to secure their legal rights as sovereign nations,” said Colin Murdoch, trade ambassador for Antigua. “It is important to note that the intellectual property remedy is incorporated in the WTO agreements and approved by all members, including the United States.”

Getting the authorization from the WTO to suspend intellectual property rights does not require Antigua to ultimately resort to that suspension, and the government remains hopeful that the US will use the intervening period to engage the Antiguan government in more productive discussions. If and when Antigua does take action against American intellectual property holders, it will be done in accordance with international law and under strict supervision and direction of the Antiguan government.

“As a result of the US failure to comply with international law, the Antiguan economy and our citizens have suffered. In previous statements, the United States has indicated there could be possible adverse consequences for Antigua and its citizens for resorting to this WTO-sponsored remedy. We assume this is just rhetoric for public consumption, and we look forward to the United States putting aside these tactics and focusing their future efforts on thoughtful negotiation rather than on hyperbole and intimidation,” said Dr McChesney Emanuel, chairman of the Antigua and Barbuda Investment Authority.