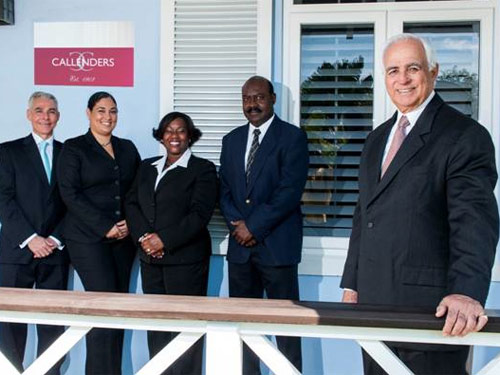 Callenders & Co., one of the nation’s most respected law firms, has named three new partners, bringing to eight the number of partners in its two New Providence offices and its Freeport location.

The three attorneys, all previous senior associates with the firm, are Llewellyn V. Boyer-Cartwright, Courtney L. Pearce and Simone A. Morgan-Gomez.

“We are very pleased to announce the expansion of the partner base of Callenders & Co.,” said Colin E. Callender, QC, managing partner. “Over a period of years, Mr. Boyer-Cartwright, Mrs. Morgan-Gomez and Ms. Pearce have brought wisdom and insight to the practice of law, great attention to detail to their clients and case load and unique areas of expertise to the firm. Each of those areas of expertise has contributed to the ongoing diversification of Callenders’ specialization, allowing us to serve local and international clients with greater efficiency and satisfaction.”

The expanded partnership is the latest development for the active firm. In late 2012, Callenders & Co. was named The Bahamas’ leading corporate law firm by Corp INT’L, a network of leading advisers and financiers. Corp INT’L, along with networking and education, is known for its publication of a critical thinking, timely legal and financial services newsletter received by more than 280,000 professionals worldwide.

Along with global accolades, the firm’s attorneys have earned individual recognition for excellence. Earlier in 2012, Callenders’ partner Chad D. Roberts was selected as the nation’s top real estate attorney by Corp INT’L. and Boyer-Cartwright was nominated by the Bahamas Financial Services Board (BFSB) for one of its top awards following his campaign to create an international aircraft registry in The Bahamas. He was the only member of a law firm to make the short list of finalists for BFSB’s prestigious Professional of the Year Award.

Bilingual and a member of the Bar in three jurisdictions, Morgan-Gomez studied at Barry University (1988), Georgetown University Law School (1992), earned her LLM in International Business Law at the University of Manchester  (1993) and her most recent legal certification  at the University of The West Indies (1997). In 1994, she was admitted to the Florida Bar, in 1997 to the Bar of her native Jamaica, and in 2006 to The Bahamas Bar. She has been practicing in The Bahamas since 1997 and specializes in Insolvency Law, Complex Business Litigation, Shareholder Dispute Litigation and Employment   Law. She speaks English and Spanish.

Pearce was admitted to the Bar of England & Wales and The Bahamas Bar in 2006 and is a member of The Honourable Society of Gray’s Inn. She studied at Colgate University (2001), University of Buckingham (2005) and received her bar accreditation from The College of Law, London (2006). Pearce is fluent in English and Spanish and specializes in Intellectual Property Law, Construction Law, Commercial and Trust Litigation and Cross-Border Disputes. She also has a vibrant Appellate practice. Boyer-Cartwright, a qualified commercial airline pilot, studied at the University of Buckingham (1993), University of Westminster (1994) and Everglades University (2004). He was admitted to the Bar of England and Wales and The Bahamas Bar in 1994. A member of The Honourable Society of the Inner Temple, he was the first Bahamian admitted to the Lawyer Pilot’s Bar Association, an international organisation dedicated to airline and aircraft safety and legal issues surrounding the aviation industry.  He is also a member of the Society of Trust & Estate Practitioners. Boyer-Cartwright specializes in Real Estate Law, Aviation Law and Trademark Law.

“The complement of partners is particularly relevant in building the strong litigation capabilities of the firm,” said Callender, “Partnership is not a gift. It is earned and I have every confidence and comfort in knowing that all three of these attorneys, Llewellyn, Courtney and Simone, have earned their place as partners in this firm.”
The firm’s other partners include Lester J. Mortimer, Stephen A. Turnquest, Chad D. Roberts and Fredrick R.M. Smith, QC in Grand Bahama.