I commend U.S. Supreme Court Justice Antonin Scalia for symbolically condemning President Obama’s anti-religious, pro abortion policies by choosing to wear to the president’s inauguration a custom-made replica of the hat depicted in Holbein’s famous portrait of St. Thomas More. More was an English statesman who, during the reign of King Henry VIII, gave his life defending liberty of church and integrity of Christian conscience.
Obama’s aspiration for justice is captive to ideologies which hide or pervert its true meaning, and which propose to people struggling for their liberation goals which are contrary to the true purpose of human life.  Let us hope that Obama will be moved by the grace of God in his second term to hear the genuine voice of conscience and that he will desist from his political mission in destroying the very soul of America. 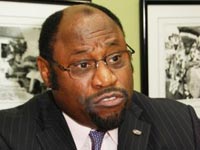