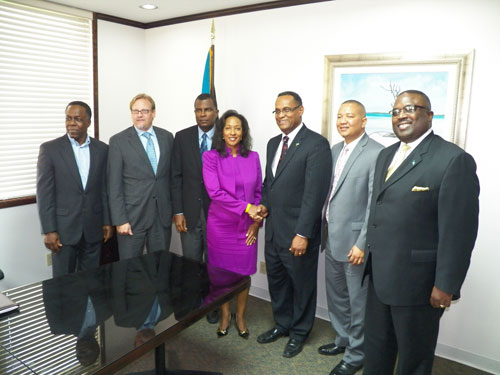 The official signing of a host country agreement, which will allow the Island of Grand Bahama to host Design Caribbean 2013, took place at the Ministry for Grand Bahama on Friday morning.

The official Host Country Agreement was signed between the Government of The Bahamas, in partnership with the Grand Bahama Port Authority and the Caribbean Export Development Agency (CEDA).

Addressing the gathering assembled in the conference room, Minister Darville said that it is his mandate to promote the advancement of Grand Bahama as a tourism, light manufacturing and industrial centre, and to work synergistically with private and public partners to revitalise the island’s economy.

“Therefore, it is truly an honour and pleasure to welcome you to the official signing of the host country agreement between the Government of The Bahamas in partnership with The Grand Bahama Port Authority and Caribbean Export Development Agency.

“The memorandum of understanding details the roles and functions of The Bahamas as host of the 2nd Design Caribbean Trade Show, which is slated for June 20th – 23rd, of this year at the Grand Lucayan Hotel, here on the beautiful island of Grand Bahama,” he informed.

Dr. Darville further explained that the Ministry for Grand Bahama was established as a result of the Government’s realisation that crucial decisions had to be made and significant partnerships formed in order to attract new foreign and domestic investments to Grand Bahama Island, and subsequently, provide entrepreneurial and employment opportunities for residents.

“As Minister for Grand Bahama, I am particularly pleased that the government has committed the finances to ensure that the Design Caribbean Trade Show will take place on Grand Bahama, which is considered the industrial capital of The Bahamas.

“This world class trade show will facilitate the display, sale and distribution of the finest products that Caribbean artists have to offer, and it is my belief that Grand Bahama, which has modern infrastructure, a deep water harbour, and a strategic location in the free trade zone, also,  a en-viable transshipment hub in the western hemisphere, is the perfect venue for events of this kind,” he stated

He told the gathering that there are three principal business sectors in Grand Bahama which include tourism, financial services and industry.

“But we are working diligently to further diversify our economy by including agro-business and expanding the maritime industry. We are convinced that with our huge land mass, our world class harbour and our proximity to the Southern United States, we are positioned to compete globally and for growth and development.

“We are also cognisant of the fact that our country’s stability and economic success relies heavily on the synergistic efforts of the private and governmental sectors in developing these key areas. Therefore, after extensive research and planning, our team is now convinced that this Design Caribbean Trade Show will act as a powerful catalyst to attract visitors, buyers and investors to our shore,” the Minister said.

He also took time out to recognise the collaborative efforts of the staff of The Bahamas Agricultural and Industrial Corporation, The Grand Bahama Port Authority and The Ministry for Grand Bahama, who have worked persistently to ensure that Grand Bahama was selected and confirmed as the venue for the prestigious event.

Mr. Darville also commended the owners and operators of The Grand Lucayan Resort, whose state of the art, spacious facilities will be used to comfortably accommodate the delegates and house this world class event.

“As the host country, it is our belief that this Design Caribbean Trade Show will bring numerous benefits to the island of Grand Bahama. Firstly, this forum will raise the profile of Grand Bahama and promote this island as a global shipping and trade centre.

“Secondly, it will provide a substantial injection into the economy of Grand Bahama as it is expected that hundreds of persons, including artisans from all around The Caribbean will participate and hundreds of buyers from around the world will attend.

“In addition it will expose local artisans and manufacturers to overseas buyers in retail, hospitality, design, music, film and fashion; thus providing them with opportunities to exhibit their talents, market and sell their products and services.

“This trade show will also help to enhance our creative industry and foster linkages with Bahamian artisans and their Caribbean counterparts.  In essence, Design Caribbean will facilitate the increased regional and international exposure that Grand Bahama needs,” Dr. Darville stated.

Also making brief remarks and lending support to the event was Barry Malcolm, President of the Grand Bahama Chamber of Commerce.