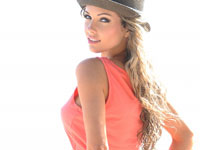 She dives.  She fishes.  She’s the February 2013 Centerfold in Playboy Magazine. And she’s coming to the historic Bimini Big Game Club on Saturday, February 23rd.

Shawn Dillon will be the official hostess of the Big Game Club’s upcoming Wahoo Smackdown II tournament, helping with the final weigh-ins, presenting trophies and, well, posing for pictures and signing autographs for participating teams.

“I’m a mermaid who loves being by the water more than anything,” says the searingly hot Sarasota, Florida native. “It’s where I feel happiest and most at peace.  It’s like heaven to me.”

Shawn, who has won major bikini competitions from Vegas to the Bahamas grew up fishing with three brothers, either on her uncle’s boat in Bimini or in the lake in their backyard. Also a surfer, a certified scuba diver and an avid wakeboarder, Shawn sports a subtly placed tattoo of a shark and a scuba diver.

Her February pictorial was shot on a boat in the Florida Keys.

The tournament, a follow-up to a highly successful Wahoo Smackdown tournament in November, is scheduled for February 21-23.