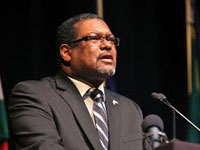 Following the shooting death of a young mother on Tuesday in St John’s, the minister of national security in Antigua and Barbuda, Dr Errol Cort, has announced new plans by the government to address an escalation in gun-related crimes, including enforcement of the death penalty.

“I wish to emphasize that the death penalty still forms part of the laws of Antigua and Barbuda. To this end, all necessary legal processes needed to give effect to the death penalty will be utilized,” he said.

In the meantime, all police officers on vacation have been recalled and rewards totaling over $100, 000 have been offered for the arrest and conviction of those responsible for the murder of Susan Powell and other gun related crimes.

Cort also announced an immediate increase in day and night patrols, stop and search exercises as well as other surveillance techniques, in an effort to apprehend those who commit violent acts.

He said he will be shortly taking to Parliament a Criminal Justice Bill that will seek not only to increase the penalties for gun related and other serious crimes, but will also seek to create a number of new offences and stiffer penalties in an effort to further control criminal activities taking place in the country.