Coastal Awareness For The Government 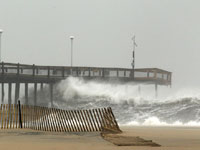 Hurricane Sandy left much destruction along the Bahamas’ coastline last year. The accompanying storm surge was unanticipated and wreaked havoc on docks, coastal roadways, and seawalls. The Bahamas must implement measures to mitigate and perhaps prevent such future destruction and we cannot rely solely on engineering solutions to strengthen our coasts.

The coastal policies of The Bahamas are both inadequate and unenforced leading to haphazard installation of seawalls and groins, destruction of dunes and various setbacks. To adequately protect the coast, The Bahamas must stop thinking of it on a property-by-property basis and review the coast as an integrated system.

Most developers vie for the perfect sandy beach; some request the removal of the rocky shore to replace it with a groin to capture sand, if any, in the longshore current. The Bahamas time and time again fails to understand the ramifications for such shortsighted singular considerations.

Western New Providence is littered with groins, none more so prevalent than in the prestigious community of Lyford Cay. Here, a study notes that the longshore current carries sand from east to west along the northern coast with significant erosion having occurred over the decades. The source of the erosion is due in part to the costly installation of groins sought to keep private sandy beaches.

In a domino effect, homeowners west of a groin experience a depletion of sand and thus install more groins to capture the lost sand, thus depleting sand to their west and so on. Even though the study recommends removal of the groins, it will never happen. Yet, such rampant installation of coastal modifications without regard for the overall coastal system and processes should serve as an example of poor coastal management.

Furthermore, it was naive of the prime minister at the time to speak of saving or protecting our coastlines with engineered solutions. The Bahamas cannot think of itself as Holland or New Orleans where the sea is held by complex levees. Horrific images of the 9th Ward after the levee failures attest to the danger in relying on man-made solutions to tame nature.

The prime minister said: “Governments have to plan to protect the coastlines. One of the most significant challenges we have is coastal erosion, where the sea is just claiming so much of the land, and for an island nation it becomes a top priority.”

He added: “The concern that we have and ought to have in an archipelagic nation is to ensure that we protect ourselves against the sea taking over the land, and people can tell you stories of where they used to picnic and they show you the water, the water has taken it over.”

The Bahamas can protect itself moving forward by implementing recommendations by expert coastal engineers with consideration for the natural barriers, reefs, sinks and mangroves, which deflect and absorb storm surge. Charged statements such as “where they used to picnic”, exploit panic leading to short-term solutions, such as seawalls that may have the unintended result of causing additional coastal erosion.

This shallow provisioning of coastal policy across numerous ministries weakens its implementation and leads to much confusion and miscommunication. Even more so, the government must do more to monitor its coastlines for unpermitted structures.

The blatant disregard to government procedure and policy continues because of poor enforcement, poor communication between agencies and the woefully long time to get a response from government at all.
The beauty of our coastline will always draw attention; but we cannot put private development and short-term solutions ahead of an integrated long-term coastal policy.