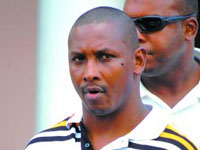 A magistrate yesterday convicted a drug dealer of escaping from police custody by swapping places with his son.

Maycock, whom federal prosecutors in South Florida claim is the head of a multinational drug trafficking gang, is fighting extradition on those allegations along with his son.

Maycock was arrested in June 2008 in relation to the seizure of 1,250 pounds of marijuana and three unlicensed handguns at an apartment at Marine Drive, West Bay Street, in May 2008.

He is serving a three-year sentence for a conviction for those offenses.

In delivering his decision, Rolle-Davis recommended that police implement a procedure where suspects are immediately finger-printed and photographed upon arrest.

He also suggested that a tamper-proof video surveillance system be installed in all police stations so there would be a record of all activity in the event that allegations of impropriety arise.

The magistrate has deferred sentencing to February 20. Lewis and Maycock Jr. remain on bail until then.