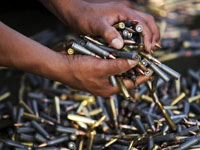 The defendants in a gun smuggling case affirmed their innocence during their testimony yesterday.

Trevis Demeritte, his mother Bronell Humes, both of Dignity Gardens, and Patrick Rolle, of Bellot Road, are on trial before Gun Court Magistrate Joyann Ferguson-Pratt in connection with the seizure of 16 guns and 867 rounds of ammunition at Potter’s Cay Dock on August 19, 2011.

Demeritte and Humes picked up three shrink-wrapped pallets of groceries and appliances from the Cherice M, which plies between Bimini, Cat Cay and New Providence, according to evidence.

Police stopped their truck on suspicion that they had not paid the customs duty. The officers found guns and bullets secreted away in a television, washing machine and laundry detergent when they inspected the items.

Humes, who is unemployed, testified that she fainted in shock when a police officer showed her the gun. Her son, who works as a mechanic, said he too was surprised when the illicit cargo was uncovered.

Demeritte claimed that he was picking up the pallets for his sister and his friend Chico, who is also known as ‘Cat’. Demeritte said he didn’t know Chico well and was unable to provide his surname, phone number and address when he was cross-examined by Garvin Gaskin, the deputy director of public prosecutions.

Demeritte acknowledged that Rolle was a good friend of his. He said the pallets were shipped in Rolle’s name because he lived in Bimini.

Humes said she had traveled to Florida at the end of July 2011, but she only bought clothing. However, she said her daughter purchased groceries.

The groceries were shipped from Florida to Bimini in the name of Patrick Rolle, who then forwarded the pallets to Demeritte after he cleared customs.

Rolle, who worked as an assistant dockmaster at the Cat Cay Yacht Club, said the pallets arrived from Miami in Bimini on August 11, 2011.

Rolle, who is now a security guard, said he poked his finger through the black plastic and peeped through.

Following this cursory examination, he claimed he had no further contact with the pallets, which were placed in storage after he paid an $800 deposit on the duty with a check.

Rolle said the pallets were later placed on the Cherice M.

The defendants who are on bail are represented by Tai Pinder. They make their next court appearance on February 21.